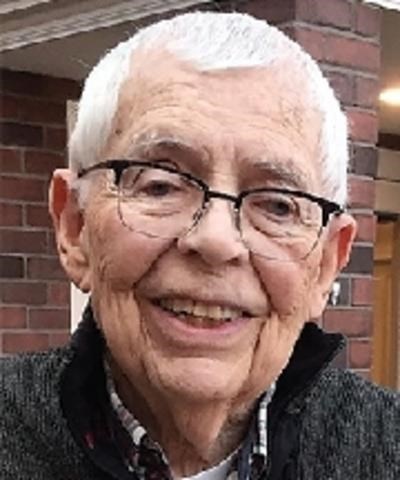 BORN
1929
DIED
2019
FUNERAL HOME
Sparkman/Hillcrest Funeral Home & Memorial Park
7405 West Northwest Highway
Dallas, TX
MORROW JR., D.O. Dr. Joseph H. Dr. Joseph H. Morrow Jr. D.O. passed away peacefully May 25, 2019 at the age of 89. Dr. Morrow, "Doc," was a joyful light to all who were around him. Left to remember Joseph are his children; Stephen Morrow of St. Louis and Cinda Koch (James) of Dallas; grandchildren Andrea Eberle, David Eberle (Tamara), Ryan Koch (Jamie) and Kyle Koch; great grandchildren Mya and Grace Eberle and Mattison and James Koch. In passing, Dr. Morrow joins his precious and beloved daughter, Pamela Eberle Lammert. Fun and good humored. Sweet and caring for others. Devilish grin and sparkling eyes. These are words that best describe Doc. Even as his memory limited him, Dr. Morrow's broad smile, humor, and kind nature continued to shine. Joseph was an exceedingly bright man. He loved studying all things - stocks and the market, complex medical journals, horse racing and the mathematical formulas of picking a winner. He loved music of the 1930s and 40s - jazz, swing and big band. Having played trumpet in his own jazz band, "The Swingsters," Joseph made sure his children were properly schooled in all the musical greats of that generation. He also had a passion for classic movies and musicals of the 40s and 50s. His favorites were anything featuring Judy Garland, Doris Day or Audrey Hepburn. A fond memory will always be his excitement in laying out candy bars, peanuts and snacks, setting the stage for an evening of old movies with his children/grandchildren. Born Sept. 3, 1929 in Catasauqua, PA., Joseph knew from an early age that he would pursue a medical career. He later recalled that he spent many days of his youth at the knee of the family friend and neighbor, Dr. Newhart, learning about medicine, patient care, and the practice of healing. In 1955 Joe graduated from Kirksville College of Osteopathic Medicine (MO), married Sharon Lee Cleeton the next day, and then began his medical internship in Allentown, PA. The following year he opened his medical practice in St. Louis, MO. Joe and Sharon raised three children together- Stephen, Pamela and Cinda. The children were their pride and joy. Dr. Morrow practiced medicine for nearly 50 years from his office in St. Louis, and held many prestigious positions in the medical community there. While much of his practice was in Family Medicine, he later became known as an expert in the field of medical testimony and developed a large and successful practice in this specialty. He was a desired expert by both sides of a litigation due to his unflappable and astute deposition abilities. Joseph was a hard worker, and taught his children that most anything could be accomplished with discipline, study and pressing forward toward the goal. While he had many successes in life, he never let a setback dampen his enthusiasm about what could be accomplished next. He was an optimist and an encourager, in his words and in his actions. His children benefited greatly from his example of positive attitude, fortitude and encouragement. Upon retirement at age 75, Dr. Morrow and his then wife, Kim Siebe Morrow, moved to Cypress Texas, where he enjoyed several years in their beautiful home with his shelties - Shelby, Toby and Kipling. He adored these dogs and spoiled them generously. Doc's life in Cypress was relaxing - he spent time with good friends at Sam Houston racetrack, he enjoyed running and exercising, and he loved caring for the birds and wildlife in his large backyard. In 2016 Doc moved to Dallas to be closer to family and Silverado-Plano turned out to be the right place for him. Doc was a bright light in this community. He touched the lives of many residents, family members and the staff with his joyful and kind nature. The Silverado dogs and cats were wonderful for him. It was beautiful to see his sweet and special bond with these animals. He was happy. The past 3 years spent in Dallas near family have been a gift for all. Joseph had the opportunity to spend time with his 4 grandchildren and 4 great grandchildren. Those moments are treasured and they will be remembered forever by each of us. We express our thanks to Joseph's dear friends in Cypress Texas, whose love and care made his last years there so enjoyable and allowed him to remain in his beautiful home. To the entire Silverado-Plano Memory Care family (and animals!) we cannot express our gratitude for the loving care provided to both Doc and our family. He and we have been blessed by each of you. Services: Saturday, June 1st, 11:00a.m., Sparkman Hillcrest, Dallas TX 75225. Memorial gifts may go to secondchancespca.org.