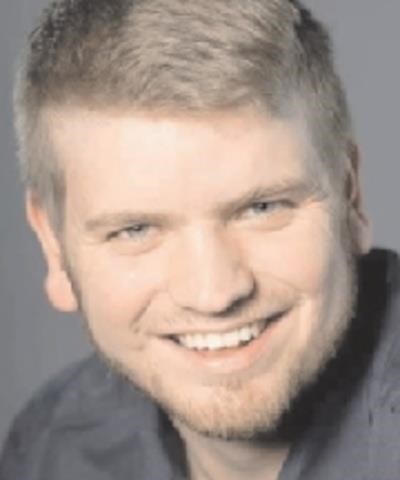 BORN
1987
DIED
2021
KINCHELOE, Oscar Oscar James Kincheloe went home to be with our Lord on Monday, October 11, 2021. He fought a courageous and valiant fight against COVID-19. Oscar was born on December 22, 1987, in Evansville, Indiana. Oscar, in his 12-year career in children's theater, had a huge and wide-ranging impact on hundreds of children and their families. He taught at Oklahoma Children's Theatre while also performing in several plays himself. He concurrently was attending Oklahoma City University (OCU) where he earned a Bachelor of Fine Arts degree in Acting, with a minor in children's theatre, from OCU in 2012. While living in Oklahoma City he was a storm chaser for the NBA's Oklahoma City Thunder. He was a graduate of Lake Highlands High School. While in high school he participated in theatre, acapella choir and Espree and musicals with his most endearing performance being Jacob's son Levi singing Those Canaan Days in Joseph and the Amazing Technicolor Dreamcoat. Oscar spent eight years directing children's plays and musicals at LifeStage Theater in Grapevine, Texas. Oscar also taught drama at Drama Kids. Most recently he was the entertainment manager for Peppa Pig World of Play in Grapevine. Oscar also got to perform in a handful of community theaters. His latest performance was as Buddy the Elf in Elf the Musical. Many people have said Buddy the Elf exemplified Oscar's core essence as a humble human being who brought joy to many people over his lifetime. Some of Oscar's most endearing traits were his enthusiasm for life, his hearty laugh, his bear bugs (he was six feet six inches), his high fives, and his firm handshakes. He was a true educator and builder of young children and teenagers. He was always encouraging his young students and helping them become better actors. He had boundless energy and was always optimistic. He had an unbelievable connection with his students. He loved kids and kids loved him. Oscar was an Eagle Scout and loved camping and hiking. He got to go on three backcountry treks including Philmont Scout Ranch, Rocky Mountain National Park, and Grand Tetons National Park. Oscar is now in his permanent home, a place so wonderful that no one can conceive how magnificent it is. A memorial service celebrating Oscar's life will be held at Lake Highlands United Methodist Church on Saturday, October 23 at 2 pm. The church address is: 9015 Plano Road, Dallas, TX 75238. Oscar is survived by his parents, Steve Kincheloe and Susan Hagemeier, and sister Hope Kemp. He is also survived by his great grandfather, James Kincheloe, and nephew Paul, and nieces Katrina, and Luna. He is survived by his birth mother, Heather Green and her husband David Green, and Oscar's two sisters, Rachel and Hannah, and Oscar's grandparents, Lon and Jeanne Bell. In lieu of flowers, the family is asking people to donate to LifeStage Theater, a nonprofit children's theater, in honor of Oscar J. Kincheloe. LifeStage's address: 3105 Ira E. Woods Avenue, Suite 180, Grapevine, TX 76051.


Published by Dallas Morning News from Oct. 21 to Oct. 22, 2021.
To plant trees in memory, please visit the Sympathy Store.
MEMORIAL EVENTS
Oct
23
Memorial service
2:00p.m.
Lake Highlands United Methodist Church
9015 Plano Road, Dallas, TX
MAKE A DONATION
MEMORIES & CONDOLENCES
Sponsored by The Dallas Morning News.
3 Entries
Steve, I was startled to see an obit for someone this young and more surprised that he was your son. I'm so sorry to hear about his death. I never knew him. After reading the obit, he must have been a wonderful person and son. Please know that all of us in the AI chapter are mourning with you and your family.
Joe Milkes
Friend
November 2, 2021
Although we never knew you, we do know your family and many friends who love you even now. Our prayers are added to those of the ones who knew you best. And, our love for your family is never-ending.
Steve & Sandy Powell
October 24, 2021
My deepest sympathies.
Brian Brown
Friend
October 22, 2021
Showing 1 - 3 of 3 results