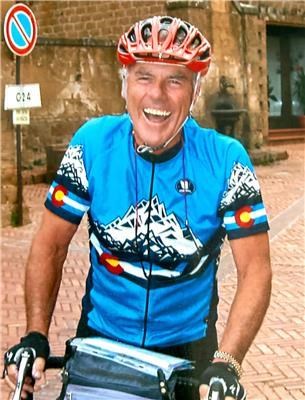 BORN
1944
DIED
2021
Robb Peglar
10/11/2021
Robert "Robb" Kevin Peglar, one of the world's greatest optimists who worked as hard as he played, especially on the golf course, died on Oct. 11, 2021. He had battled cancer for seven months.
Never one to pass up the opportunity to tell a great story in an animated fashion or tear up the dance floor, Robb was often the life of the party in the best of ways. His zest for life and his smile were contagious. He and his wonderful laughter will be deeply missed by all who knew him.
Robb was born on May 1,1944, in Cleveland,Ohio, to Arthur T. Peglar and Margaretta Gaffney, who taught their four sons and daughter that love, storytelling and family are the secrets to a good life. What they didn't have in money, they made up for in laughter. Robb discovered his talent as a fantastic golfer as a high school student, caddying at Westwood Country Club. After graduating from St. Edward High School in Lakewood, Ohio, he joined the U.S. Air Force, serving in Aviano, Italy, as a medic. His time in Italy spurred on a lifelong passion for Italy, traveling abroad and a career in international business. When he returned to Cleveland, his friend Joe Fitch introduced him to Mary Ann Malone who drove a smart-looking green Triumph Spitfire. He fell completely head over heels in love with her, and they married six months later.
With the support of the G.I. Bill, Robb attended Kent State University, crafting the university's first degree in international marketing. He was in economics class on a warm day on May 4, 1970, when he and his classmates heard shots fired followed by screams through the open windows. The semester ended early that day in what would be known as the Kent State Massacre. Afterwards, Robb and Mary Ann moved to Phoenix for Robb to get his master's degree in business at what is now known as Thunderbird School of Global Management. They met lifelong friends from all over the world, and Robb mastered a number of languages there. Throughout his life, he could switch from speaking German to Italian to French at the turn of a dime. And he did it with such gusto that no matter whether you were a stranger or friend, you felt his joie de vivre.
When Robb took a job with American International Group, he and Mary Ann moved to Hong Kong where they lived with their three daughters for several years. They loved exploring the island, along with various countries in Asia, before they moved to Darien and later Rowayton, Connecticut where they lived for 20-plus years. In Stamford, Robb started his own reinsurance company Peglar & Associates, which was truly one of his life's passions. When he wasn't working, Robb and Mary Ann shared their love for travel with their children, bringing them all over the world from the slopes of Colorado to the savannas of Africa. This tradition continued as their family grew over the years, with the addition of seven grandchildren. One of his greatest joys was spending time with his kids and grandchildren, and they loved spending time with him.
For the last 27 years, they lived in Jupiter, Fla., for the winters, meeting an incredible community of friends, many of whom were just as passionate about golf as Robb. Robb played golf nearly every day just as energized at the end of the day as the beginning. For 15 summers, Robb and Mary Ann lived in Nantucket where they met dear friends. Fortunately, Mary Ann, along with their good friends, was able to tear him away from the golf course long enough to do fantastic bike tours. What was remarkable was he and Mary Ann took up biking in their late 60s, but that did not stop them from biking across Italy, up Mount Mitchell, the highest peak in the Appalachian Mountains, and along the Danube River.
He is survived by his wife of 53 years, Mary Ann Peglar, three daughters Tori Peglar (Tom) and children (Skylar Rutkowski and Jordan Rutkowski); Lucy Peglar (Ignacio) and children (Delfina Bussy, Sofia Bussy and Felipa Bussy); and Gaffney Peglar Barnett (Dirk) and children (Bodhi Barnett and Max Barnett); his brother Rick Peglar, his sister Pat Egelston, his sister-in-laws Kathy Elmer and Kathy Lehnhard (Bruce) and his numerous nieces and nephews.
He is preceded in death by his parents, two brothers Tom Peglar and Dann Peglar and his niece Chrisi Peglar, all three of whom died of cancer way too young, and his sister-in-law Barbara Peglar.
In lieu of flowers, please donate to the Cystic Fibrosis Foundation at www.cff.org in honor of Robb Peglar. You can choose to donate to the local West Palm Beach chapter or a chapter of your choice. A celebration life will be held in honor of Robb's life at a later date.
Published by Darien Times on Nov. 16, 2021.
To plant trees in memory, please visit the Sympathy Store.
MEMORIAL EVENTS
To offer your sympathy during this difficult time, you can now have memorial trees planted in a National Forest in memory of your loved one.
MAKE A DONATION
MEMORIES & CONDOLENCES
0 Entries
Be the first to post a memory or condolences.