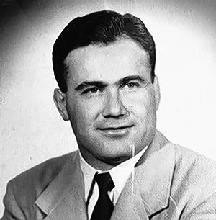 BORN
1926
DIED
2019
ABOUT
Taft High School
FUNERAL HOME
Weigel Funeral Home
980 NW Washington Blvd.
Hamilton, OH
SENOL, Ahmet Age 93, Hamilton passed away on Sunday, April 7, 2019 at Hospice of Hamilton. He was born in Izmir, Turkey on March 5, 1926, the son of Suleyman and Fatima Senol. He was 2nd Lt. in the Turkish Army serving from 1947 - 1950. Ahmet married Janet Young in 1957 in Istanbul, Turkey and she preceded him in death on August 6, 2007. He was an Olympic wrestler for Turkey in the London Olympics in 1948 and Helsinki Olympics in 1952. He wrestled for Purdue University while a student at Purdue and won the Big Ten championship in 1956. He was the wrestling coach at Taft High School, the Youth Director for the YMCA for five years and he worked for Hamilton City School for 28 years where he served as Principal at the Coolidge School, retiring in 1988. He is survived by his daughters, Leyla Fruth, Hamilton and Ayla (George) Wolfe, Columbus; six grandchildren, Gillian Fruth, Meredith Fruth, Jack Dwiggins, Zoey Dwiggins, Lillian Wolfe and Thomas Wolfe. He was preceded in death by his parents, his wife, a daughter, Meli Dwiggins in 2010, a brother, Cahit Senol and a sister Mesude Senol. Graveside services will be held Wednesday April 10, 2019 at 2:00 p.m. at Fairview Cemetery, 5785 Brubaker Road, Eaton, Ohio 45320. In lieu of flowers memorials may be directed to Hospice of Hamilton, 1010 Eaton Avenue, Hamilton, Ohio 45013. Online condolences are available at www.weigelfuneralhome.com
Published by Journal-News on Apr. 9, 2019.
To plant trees in memory, please visit the Sympathy Store.
MEMORIAL EVENTS
Apr
10
Graveside service
2:00p.m.
Fairview Cemetery
5785 Brubaker Road, Eaton, OH
Funeral services provided by:
Weigel Funeral Home
MAKE A DONATION
MEMORIES & CONDOLENCES
Sponsored by Weigel Funeral Home.
1 Entry
My sincerest condolences to the family for your loss. Please draw comfort from God... He promises us to comfort us through all of our trials. (2Corth.1:3,4)
April 10, 2019
Showing 1 - 1 of 1 results