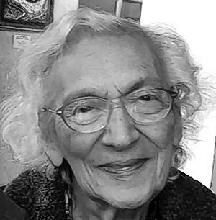 BORN
1927
DIED
2020
BRANT, Bernice Ezekiel Bernice Ezekiel Brant died September 9 in Dayton, Ohio. Born in 1927 in New York, to Lilian and Edward joined by brother David, she adored the city. In 1941, her union organizer father got blacklisted and Eleanor Roosevelt got him a job in DC. There, Bernice fell in love with Herbert Ezekiel and his family. In the early 1950s, they moved to Dayton View where they raised Michael, Jonathan, and Judith. The couple was politically active particularly in the Dayton View Neighborhood Council. Bernice worked at Beth Abraham Synagogue and was involved in the Jewish community, serving on the Hadassah board into her 90s. After Herbert died in 1974, Bernice became a social worker for Catholic Social Services. She married Bertram Brant and they shared three decades of love and adventure. Warm and optimistic, she loved people: as granddaughter Clara wrote, she "glowed from the inside" and brought "joy and warmth to anyone lucky enough to cross her path." Bernice is survived by daughter, Judith; grandchildren Clara and Eizo Lang-Ezekiel, Edward Ezekiel, and Simone and Justin Brant; sister-in-law Ramune Watkins; daughters-in-law Mary Jane Colyer, Lisa Croen Quaid, and Renee Brant; and nieces and nephews Aaron, Daniel, Joshua, Margalete, Danah, Gideon, and Michal Ezekiel; Samuel and Nechama Bernhardt, Rachel Ezekiel-Fishbein and Tamar Ezekiel Granor. Donations in Bernice's memory may be made to Planned Parenthood, the ACLU, Hadassah, Hospice of Dayton, or to support Democrats in the upcoming election.
Published by Dayton Daily News on Sep. 13, 2020.
To plant trees in memory, please visit the Sympathy Store.
MEMORIAL EVENTS
To offer your sympathy during this difficult time, you can now have memorial trees planted in a National Forest in memory of your loved one.
MAKE A DONATION
Please consider a donation as requested by the family.
MEMORIES & CONDOLENCES
1 Entry
Such a beautiful neighbor
Sam and Cynthia Crosby
Neighbor
September 13, 2020
Showing 1 - 1 of 1 results