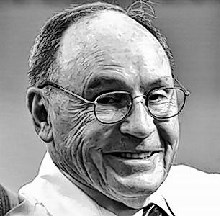 C. Charlton Mabry, 91, passed away on Feb. 5, 2021, in Hamilton, OH of natural causes. Charlton was born January 4, 1930, in Jackson, TN, to Charles Mabry, Sr., and Dorothy Wise Mabry. He grew up in Knoxville, TN, graduated from Maryville College in 1950 and received his MD from Emory University in 1954. He served as a battalion medical officer in the US Navy Medical Corps.

After his service, he completed pediatrics training at Temple University, where he was awarded a National Institutes of Health Fellowship. Dr. Mabry was a founding faculty member at the University of Kentucky College of Medicine. He taught, cared for patients, and researched through most of his career, publishing extensively on PKU syndrome, diabetes, and other metabolic conditions. "Mabry Muscular Dystrophy" was named in recognition of his research. He also identified a rare genetic disorder in 1970 that came to be known as Mabry Syndrome. Dedicated to the children of Appalachia, Charlton helped start pediatric diabetes clinics in Pikeville, Barbourville and Booneville, KY. Being from Appalachia himself, he had a special fondness for people from the mountains. Charlton was "chief lobbyist" for four healthcare bills in Kentucky. In 2005 his fondest hope was realized when Senate Bill 24 was signed into law by then-Governor Ernie Fletcher. This bill expanded Newborn Screening from 4 to 29 disorders, saving roughly 100 babies each year from premature deaths or lifelong developmental disabilities. In 2009, Dr. Mabry was asked to write a history of the Department for its 50th anniversary. He happily agreed, and in 2010, First Fifty: A Pediatric Story (2010) was published. He continued to see patients and do research until age 81! His last professional publication was a collaboration on Mabry Syndrome published in the European Journal of Medical Genetics in 2020 at the age of 90. Chart was a family man. He loved his wife Barbara deeply - they were married for 68 years until her death in 2020. He loved his children, grandchildren and great-grandchildren - his face would light up to see them. He enjoyed tending an orchard and beekeeping at the family's farm in Powell County, producing batches of Sourwood Honey for much-anticipated Christmas gifts. He researched his family's genealogy and created wonderful, meticulous, hand-drawn family trees. He loved his Sunday School and dinner club friends. Finally, he was a good-natured gardener for Barbara's many projects. Charlton was predeceased by his wife, Barbara Mabry; his parents, Charles Mabry, Sr., and Dorothy Wise Shivery; daughter, Anne McMahan; sister, Carolyn Clonts and brother-in-law, Richard Iddins. He is survived by sons and daughters-in-law, Dr. Michael and Helen Mabry, Pittsburgh; David and Sarah Mabry, Oxford, OH; Dr. Jonathan and Jennifer Mabry, Tucson; son-in-law/wife, Dr. Matthew McMahan and Tish Platt, Lexington, KY; grandchildren, Dr. Adam McMahan, Alan Mabry, Andrew Mabry, Brian McMahan and Rachel Mabry; great-grandchildren, Douglas

Dylan Mabry, Ryland Mabry, Micah McMahan, Rory Bolton and Natalie Mabry; sister, Dorothy Iddins. The family is deeply grateful to all the nursing staff and aides at Westover Retirement Community for their loving care of Charlton after his move to Ohio in 2019.There will be a private family service at Kerr Brothers followed by burial at Lexington Cemetery. In lieu of flowers, the family is requesting donations to Maxwell Street Presbyterian Church/Mission Ministry, Kentucky Cystic Fibrosis Services, and the National Multiple Sclerosis Society. Rejoice today, children of Kentucky – one of your champions has gone to his reward.
Published by Journal-News on Feb. 8, 2021.
To plant trees in memory, please visit the Sympathy Store.
MEMORIAL EVENTS
To offer your sympathy during this difficult time, you can now have memorial trees planted in a National Forest in memory of your loved one.
MAKE A DONATION
MEMORIES & CONDOLENCES
0 Entries
Be the first to post a memory or condolences.