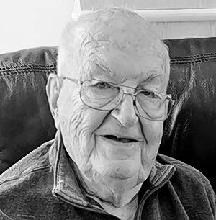 Colorado, in 1927 to Nathan Mickels Chamberlain and

Chamberlain. After losing both of his parents by the age of 13, George moved into the Myron Stratton Home orphanage in Colorado Springs along with his sister. Just prior to his eighteenth birthday, George joined the U.S. Navy and served his country during the final days of WWII. After finishing his

service term in the Navy, he enrolled at Colorado College where he studied Accounting. He worked nights to put himself through college and graduated at the top of his class.

After graduation, George accepted a job as auditor with

Arthur Anderson in their Chicago office. During his time there he met the love of his life, Connie. After a six-month courtship, they were married. Just before the birth of their first child, George took a job at L.M. Berry and Company and moved to Dayton, Ohio, where he was a leader, mentor and friend to many over the 30 years of his employment. George retired as Senior Vice President, System & Operations in 1988. George and Connie cherished family time and enjoyed traveling on family trips that took them from coast to coast. George was an avid golfer as a member of Walnut Grove Country Club. In addition to golf, George enjoyed snow

skiing, biking and boating. Retirement years included more traveling and taking care of his three grandchildren. He showed up at school at least one day every week and had lunch with his grandkids. George's life was centered around doing for others and he was active in the community through volunteer activities that included President of the RTA board, co-chair of the Americana Festival in Centerville, coach and board member of the Centerville/Washington Township baseball league, member and officer of the Dayton Exchange Club, and Treasurer of the Walnut Grove Board. He will be forever remembered for his selfless and loving demeanor. George was preceded in death by his wife, Connie Chamberlain and his great-grandson Graham Thomas Riley. He is survived by his daughter, Kim Riley (Tom), son, Brad Chamberlain (Margie), 3 grandchildren, Matthew Riley (Abby), Kristin Heit (Corey) and Audrey Chamberlain. He is also survived by two great-grandchildren whom he adored Delaney Riley and Camden Heit – and was so excited about the very soon arrival of baby boy Heit. Funeral services will be held Friday, September 10 at 2 PM at ROUTSONG FUNERAL HOME, 81 N. MAIN ST, CENTERVILLE. The celebration of life will be for both George and his beloved wife, Connie, who passed away on March 24, 2020. Family will greet friends 1:00-2:00 PM at the funeral home prior to the service, with services starting at 2:00 pm at the funeral home. In lieu of flowers, memorial contributions may be made in George's name to For Love of Children (FLOC) at 128 W. 1St St, Dayton, Ohio 45402 or online at flocdayton.org. To share your memories and condolences with the family please visit www.routsong.com.
Published by Dayton Daily News from Sep. 8 to Sep. 9, 2021.
To plant trees in memory, please visit the Sympathy Store.
MEMORIAL EVENTS
Sep
10
Visitation
1:00p.m. - 2:00p.m.
Routsong Funeral Home & Cremation Services - Centerville
81 N. Main St, Centerville, OH
Sep
10
Funeral service
2:00p.m.
Routsong Funeral Home & Cremation Services - Centerville
81 N. Main St, Centerville, OH
Funeral services provided by:
Routsong Funeral Home & Cremation Services - Centerville
MAKE A DONATION
MEMORIES & CONDOLENCES
Sponsored by Routsong Funeral Home & Cremation Services - Centerville.
2 Entries
My brief time with George at Randall residence was very special.
Bill reynolds
Other
September 8, 2021
George was one of the nicest people I ever knew. Condolences to his family. RIP George.
Bill Reber
September 8, 2021
Showing 1 - 2 of 2 results