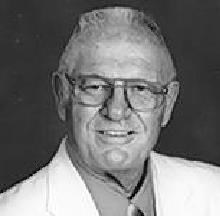 BORN
1933
DIED
2020
WUNDERLY, George William "Bill" George William (Bill) Wunderly, 86, passed away July 9, 2020, in Glendale, Arizona. He was born in Springfield, OH, on December 21st, 1933, son of the late George F. and Dorothy V. Wunderly. On June 21st, 1953, he married Lucille Marie Pierce at the First Christian Church of Springfield, where they remain members to this day. George served as an M.P. in the Army for two years, and then in a communications squadron of the Ohio Air National Guard for 24 years, retiring at the rank of Master Sargent. He was very proud of his service, and passionate in his love for his country. He also retired from D&H Manufacturing, after decades of work as a machinist and inspector. An avid bowler, gardener, cook, and fisherman, George's friendly smile and booming voice were well known from Shamrock and Victory Lanes, to the Moose, the Eagles, and the Buckeye Club. If you never talked to George it was probably by your choice, because he enjoyed talking to almost anyone. Although George did spend the last few years of his life in Arizona, he remained a loyal Buckeye at heart until the end. George is survived by his beloved wife, Lucille Wunderly, of Glendale, AZ; two sons, George R. and wife, Marilyn, of Phoenix, AZ, and Jeffrey S. and wife, Deborah, of Athens, OH; one brother, Paul E. and wife, Mary, of Sebring, FL; three grandchildren, two great-grandchildren, and several nieces and nephews. He was preceded in death by his parents and his sister, Julienne (Berry) Spencer. No formal services are planned, and the family asks that donations to the Alzheimer's Association at act.alz.org be considered in leu of flowers. Condolences may be offered at [email protected], and if you knew George you probably know already that the most fitting tribute might be to tip a glass of a cold beverage to him and enjoy the company of family and friends.
Published by Springfield News Sun on Aug. 2, 2020.
To plant trees in memory, please visit the Sympathy Store.
MEMORIAL EVENTS
To offer your sympathy during this difficult time, you can now have memorial trees planted in a National Forest in memory of your loved one.
MAKE A DONATION
Please consider a donation as requested by the family.
MEMORIES & CONDOLENCES
0 Entries
Be the first to post a memory or condolences.