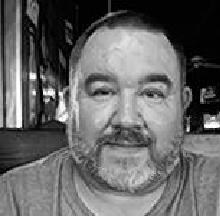 Hamilton, the son of Billie

(nee Whicker) Burns and the late James Burns, Sr. Jimmy graduated from Fairfield High School and D. Russell Lee. He was a veteran of the United States Navy. He served on the recommissioned battleship, the USS New Jersey in 1982. He also served during the Lebanese Civil War between 1983-1984. Jimmy was also stationed at Fallon Naval Base from 1986-1988. He is survived by his loving wife of over 17 years Jennifer (nee McClure) Burns; one

(Jolene) Burns, Paul Burns, and Billy (Melissa) Burns. He also leaves behind many nieces, nephews, other family and close friends. He was preceded in death by his father James Burns, Sr. and his grandparents and in-laws. Visitation will be on

Friday, April 16, 2021, at THE WEBSTER FUNERAL HOME, 3080 Homeward Way at Rt. 4, Fairfield, from 9:00AM until the time of the funeral at 11:00AM. Burial to follow in Rose Hill Burial Park with full military honors. Online condolences can be made at www.websterfuneralhomes.com.
Published by Journal-News on Apr. 15, 2021.
To plant trees in memory, please visit the Sympathy Store.
MEMORIAL EVENTS
Apr
16
Visitation
9:00a.m. - 11:00a.m.
Webster Funeral Home
3080 Homeward Way, Fairfield, OH
Funeral services provided by:
Webster Funeral Home
MAKE A DONATION
MEMORIES & CONDOLENCES
Sponsored by Webster Funeral Home.
1 Entry
May God bless you and your family in this time of sorrow.
winkler family
Family
April 17, 2021
Showing 1 - 1 of 1 results