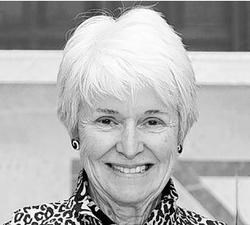 McELWAIN, Katherine Ann (Geraghty) a loving wife, mother, grandmother, great-grandmother, sister, aunt, daughter, and friend, passed away at home on Fripp Island, SC, on January 3, 2014. She was born to the late Thomas and Margaret Geraghty, June 22, 1932, in Cincinnati, Ohio. Kay was married for 55 years to James E. McElwain. She was a 1950 graduate of Julienne High School in Dayton, OH. Kay and Jim lived in Steubenville, Ohio, later moving to Dayton, Ohio where they raised their family. During their retirement years, Kay and Jim spent time between their homes in Ohio, Michigan and South Carolina. Kay enjoyed time with her grandchildren, traveling, golfing, and socializing with their many groups of friends. Over the years, Kay was an active member of Holy Angels Church in Dayton, OH, Incarnation Church in Centerville, OH, St. Peter's Church in Beaufort, SC, and Holy Cross Church on Beaver Island, MI. Kay was involved in the Christ Child Society of Dayton and took communion to the residents of Morningside of Beaufort and River Oaks Assisted Living. Kay volunteered her time for Hospice on Beaver Island. Kay is survived by her devoted husband and four children: Ann Feltner (Bob), Clare Dowrey (Scott), Jane Shine (Charley) and Jim McElwain, Jr. (Ellen), sixteen grandchildren, their spouses and fiancés, and three great-grandchildren. She is also survived by her siblings, Edward Geraghty (Corinne), Peggy Carroll (Jack), and Thomas Geraghty (Suzanne), and many nieces and nephews. She was preceded in death by her sister, Mary Alice Geraghty. In lieu of flowers, the family is requesting that donations be made to Beaufort Women's Center (beaufortwomenscenter.blogspot.com), Priests for Life (priestsforlife.org) or the Wounded Warrior Project (woundedwarriorproject.org). A Memorial Mass will take place on Saturday, January 11, 2014 at 10:00am at St. Peter's Catholic Church, Lady's Island, SC. The family will receive visitors beginning at 9:00am. Inurnment will take place at the Columbarium on the grounds of St. Peter's. On Saturday, January 25, 2014 at 10:30am a Memorial Mass will take place at Holy Angels Catholic Church, Dayton, OH. She was perfect! and will be greatly missed by all of her family and friends.

Published by Dayton Daily News on Jan. 8, 2014.
To plant trees in memory, please visit the Sympathy Store.
MEMORIAL EVENTS
To offer your sympathy during this difficult time, you can now have memorial trees planted in a National Forest in memory of your loved one.
MAKE A DONATION
MEMORIES & CONDOLENCES
13 Entries
Jim and Family - So very sorry to learn the sad news about Kay. Always such a delight. Stay strong.

Wally Maher
January 10, 2014
Jim and family,
John and I send our deepest sympathy in Kay's death. I remember her as a vivacious, energetic and perpetually happy and beautiful lady. I'm sure you and your family will miss her very, very much. With heartfelt sympathy, Barbara and John Geri
January 9, 2014
Jim, Joe and I are so saddened by Kay's death. She will be remembered as such a sweet, sweet person. Our thoughts are with you and your wonderful family in this time of great sadness and mourning. Love, Joe and Lois Williams
lois williams
January 9, 2014
Jim, we were so very sorry to learn of the passing of Kay. Our thoughts and prayers are with you and the family. Blessings to all of you.