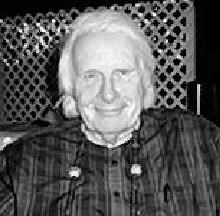 It is with deep sadness that we announce the passing of our beloved daddy, grandpa,

Keith was born in Dayton, Ohio, to the late William

Nelson. Keith graduated from Patterson Co-Op High School in 1954. Eager to see the world, he immediately enlisted in the Navy. He shipped out to the

Pacific where he was deployed to Japan and was part of the US security presence at the Melbourne Olympics in 1956 on the U.S.S. Bremerton.

After the Navy, he returned to Ohio and attended the Ohio State University in Columbus where he embraced his lifelong calling as a philosopher poet, which ultimately did not lead to graduation or a degree. Keith was married to Leda Serey for 16 years. They traveled back and forth across the country,

living in California, and eventually settling in Connecticut. They had two daughters.

A defining moment for Keith came in 1976 when he embraced sobriety. For the next 45 years, Alcoholics Anonymous was central to his life as both a member and a sponsor. Throughout these years, he sponsored and helped hundreds of people in their struggles with alcoholism and addiction. Keith spent his professional life as a theatrical promoter. Keith eventually settled in Cleveland.

Keith was a big man, with flowing hair. He wore berets, bright shirts, and self-made beaded necklaces around his neck. He had a deep, booming voice. He was prone to pontificate on anything and everything. Keith was well read, very intelligent, and could discuss many topics with fluency. He made an impression on everyone he met. He had a joyous and curious spirit that never stopped exploring. Keith was a great

romantic, a consummate charmer and an unabashed flirt. It is fitting that Keith passed on Valentine's Day.

Keith is survived by his darling daughters Lisa Finnegan of Armagh, Northern Ireland and Kirsten Cunha of New York, New York; his grandson Theodore (Teddy) Cunha; his brother and sister-in-law William and Donna Nelson; his sons-in-law, James Finnegan and Mark Cunha; and his nieces Tricha Coy, Angie Smith, and Sandy Manson. He is predeceased by his brother Wallace Nelson.

Keith was larger than life and his passing leaves a large void in the hearts of those who knew him. He once said that he fell in love many times a day. If life is measured in love, Keith had a great life. We will miss him dearly.
Published by Dayton Daily News on Feb. 17, 2021.
To plant trees in memory, please visit the Sympathy Store.
MEMORIAL EVENTS
To offer your sympathy during this difficult time, you can now have memorial trees planted in a National Forest in memory of your loved one.
Funeral services provided by:
Fioritto Funeral Service
MAKE A DONATION
MEMORIES & CONDOLENCES
Sponsored by Fioritto Funeral Service.
14 Entries
I am a dear friend of Rita's We met in San Miguel around 1997 and visited with each other in Cleveland and Toronto where I live. I met Keith in Cleveland and so enjoyed his company and his joi de vivre. The 3 of us spent several delightful days together in Rehoveth (spelling). We got up early to watch the sunrise and we made and painted beads at the kitchen table! Paula informed me of Keith's sad passing. It's ironic that he and Rita passed so close to each other in time. The obituary is enlightening and entertaining as was Keith. My sincere condolences. Keith was one of the most endearing people. Judy Franklin ?)
Judy franklin franklin
Friend
February 24, 2021
I am so sorry for your loss, he was an awesome man, and seems to have lived his life to the fullest. I can see the face of a charmer, indeed. Thanks for sharing his story, it will not be forgotten. Sending love from Australia.
Vera Mally
February 21, 2021
I've never read such a beautiful obituary as this. I followed a link from twitter, I'm not even American! But it warmed my heart. RIP Keith. Hope you are back together with your brother Wally. From Wales UK
Sadie Quinlan
Friend
February 21, 2021
My father said, in the end all we can do is make great memories. We are left with that and your family is well endowed. So sorry for your loss.
James Maclean
February 21, 2021
What an exciting life he lived. I didn't know him but thank you for sharing memories with us, and may they bring you comfort in the future. He sounds like he loved life!
Sharon Hudson
February 21, 2021
I did not know Keith or the family but saw his daughter,s post on twitter. What a lovely man and I am so sorry for your and the world's loss. He must have been am amazing person. Sincerely a stranger whose heart was touched by his life story. Rebecca.
Rebecca
February 20, 2021
My deepest condolences to his family, who are dealing with a difficult time in the most difficult of circumstances. May Keith's memory always be a blessing. My prayers for comfort to the family.
Jeremy Bochenek
February 20, 2021
Thank you for sharing wonderful memories of a of a life lived to the full. Best wishes.
John Fitzgerald
February 20, 2021
Keith commanded a corner of a room where I went for Weekly Sunday meetings. His presence and pithy comments will be dearly missed.
Bob McK.
Friend
February 19, 2021
Keith was a member of our family. He will be greatly missed. My thoughts and prayers are with his daughters that he spoke of often and loved very much. Rest in peace my dear Keith!
Marianne DeLauro
Friend
February 19, 2021
Please accept my heartfelt condolences. Keith Nelson was all that was said in his obituary and so much more. A delightful friend. He will be missed.
Beverly Schilling-Gillis
Friend
February 17, 2021
What a wonderful tribute to a life well-lived. I remember seeing your dad at the office--I'm sorry I didn't get to know him--I would have loved to have played chess with him! I hope those cross-country memories bring you comfort along with all of your other memories. What an amazing man. Praying for comfort for all of his loved ones.
Maura Lynch
Acquaintance
February 17, 2021
Keith Nelson was a favorite of ours along with his brothers Bill and Wally! My mother was a best friend of Keith’s mother, Evelyn. They grew up together. I remember when Keith and his wife had a baby, Mother asked Keith what she could get the baby and he said, “Money and a car!” He was so bright and funny! His mother was too! I remember visiting them when we were all young and they were always so nice and so funny! Sorry I didn’t get to talk to Keith when he was older! Anne Bippus Folkerth, daughter of Phyllis Krumholtz
Anne Folkerth
Friend
February 17, 2021
Deepest condolences to you all. Lots of love from Natalie, Richard and the girls.
Natalie Stewart
Family Friend
February 17, 2021
Showing 1 - 14 of 14 results