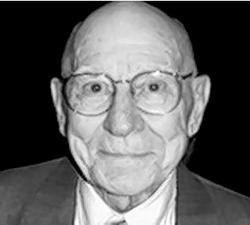 OTTEN, Sr., Mac W. Of Centerville/Dayton passed away Saturday, December 26, 2015 while convalescing at St. Leonard's. Mac was 90 years old & born December 16, 1925 to the late Cordt and Ruth (Stearns) Otten in Bellefontaine, Ohio. Mac started at Bowling Green State University in 1943 and played basketball for the Falcons. Unfortunately Mac's first season was interrupted by a call to duty. Mac spent 2 ½ years serving his country during WWII in the Navy Radio and Radar Program and servicing aircraft. Mac returned to BGSU in 1946 and led the team in scoring and to a 28 - 7 record. In three years, Mac helped BG win nearly 80% of their games, earn two prestigious post-season National Invitational Tournament (NIT) berths, won team's MVP honors twice, earned All-American honors (1949), earn first team All-NIT honors (1949) and set a new Madison Square Garden's Free Throw Record (15 of 17). Mac's achievements on the basketball court allowed him to play in the NBA and to be inducted into both the BGSU and the Ohio Basketball Hall of Fame. Mac worked as an accountant for 51 years. He was active in the community including serving as the President of the Washington Township Little League, Cub Master for Boy Scouts and treasurer for the Centerville Booster Club. Mac enjoyed playing cards & cribbage, watching/attending sporting events, membership in the Heisey and Cambridge glass clubs and spending time with his family & friends. Mac was preceded in death by his second wife of 27 years, Georgia (Hassink) Otten; his brother Donald and sister Virginia Otten. He is survived by his six children: Mac Jr (Lorrie) of Gaithersburg, MD; Brad of Centerville; Kim (Marilyn) of Cleveland; Scott (Yan Hui) of Columbia, MD; Bruce (Sue) of Denver, CO; Lori of Centerville; and seven grandchildren: Reed, Kaye, Cody, Robert, Emerson, Song (Jaiyin), and Zach (Madison). Mac donated his body to Wright State University School of Medicine for educational and scientific purposes. A private burial service will be held in Deerfield, MI at the family's convenience. A memorial gathering of family and friends celebrating Mac's life will be held later in January. If desired, memorial contributions may be made to the American Heart Association or a charity of your choice.
To plant trees in memory, please visit our Sympathy Store.
Published by Dayton Daily News on Jan. 3, 2016.
MEMORIAL EVENTS
Jan
23
Celebration of Life
11:00a.m. - 2:00p.m.
St. Leonard's Station House
8200 Provincial Way, Centerville, OH
MAKE A DONATION
Please consider a donation as requested by the family.
MEMORIES & CONDOLENCES
4 Entries
Dear Otten family, Mac was such a special person! We always enjoyed his visits while he was heading to nearby BGSU or Jeffrey's Antique Mall. Please accept our sincere condolences on your loss, he will surely be missed. Hold onto your fond memories. Love, Kathy and George Hassink
Kathy Hassink
January 8, 2016
To the Ottens:

I joined the Carney&Vlahos CPA firm in 1958 where I first met Mac and became friends.

I have never met a finer individual. It was more that a privilege and honor to know him.

Laurie: "thank you so much for your telephone call today"

Charlie Griesemer
Charles Griesemer
January 4, 2016
Dear Family,please take comfort in God who is our strength and anchor during times of sorrow.
January 3, 2016
May your memories of the wonderful times you shared with your loved one comfort you and your family, today and always.
American Heart Association
January 3, 2016
Showing 1 - 4 of 4 results