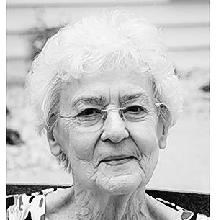 Mennonite Retirement Community in Harrisonburg, VA. A long-time resident of Springfield, OH, she has lived in VA since 2016.

Marjorie was born March 21, 1934, in Hardy Township, Holmes County, Ohio, the eldest daughter of Virgil R. and Mildred L. (Oswald) Miller. She grew up in Orrville and near Millersburg, OH. As a teenager she volunteered to serve with the family of a church pastor in Meadville, PA, where she first met her future husband Robert H. Myers. They were married near Berlin, OH, on Sept 20, 1952, and resided in the communities of Millersburg, and

Dalton, OH, where she was a Red Cross swim instructor, lifeguard, and commercial seamstress. In 1966 the couple moved to Springfield, OH, and shortly thereafter Marjorie began taking flight lessons. After acquiring a pilot's license, she continued flight training. She acquired instructor, commercial pilot, and multiengine aircraft flight ratings. She was known to be a by-the-book flight instructor and took satisfaction that none of the students she sent for licensing ever failed and, to her knowledge, none of the pilots she trained were ever in a serious mishap. There were many stories to be told from the times when she ferried aircraft from one part of the country to another! Marjorie excelled as a teacher in many roles. She taught Sunday School, swimming lessons, job coached adults with disabilities as they ventured into new roles, and spent several years as a one-on-one assistant with children struggling in school.

Marjorie was a faithful committed Christian, and took great pleasure in leading, with her husband, the young adult and young married group at Oak Grove Mennonite Church near West Liberty, OH. That association led to years of friendships with members and their growing families. Other years she would teach the older women while her husband taught the older men.

A memorial service will be held on Saturday 1:00 p.m. at Zion Mennonite Church with Pastors Sarah Piper and Steve Landis officiating. The family will receive friends following the

service. All in attendance are asked to please wear a mask for the safety of others.

The service may be viewed online by clicking the link provided in his online obituary.

Online condolences may be sent to the family by viewing