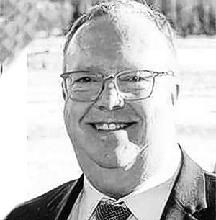 He was born October 6, 1959, in Dayton, Ohio. Mark was a graduate of Miamisburg High School. He was a member of Miamisburg Christian Church where he was an associate minister. Mark worked as

the restaurant manager at Woody's Supermarket for many years. He was an ordained minister and served as the Chaplain for the West Carrollton Police Department for many years. Most recently, Mark worked at the KKM Veterinary Clinic in Middletown. He enjoyed painting, traveling, mission work with the church, and sitting on his front porch. Mark was well loved and will be missed by all who knew him.

Mark is survived by his mother, Joann Leach; aunts and uncles, Maurice (Wanda) Leach, Sandra (Teddy) Petrey, and Irma Gibson; as well as a host of cousins, extended family and friends.

He was preceded in death by his father, Claude Leach; grandparents, Alex and Izzie Mae Deaton, Ottice and Bessie Leach; as well as many aunts, uncles, and cousins.

A gathering of family and friends will be held from 3 – 5 PM on Sunday, November 7, 2021, at Miamisburg Christian Church. A memorial service will follow at 5 PM. Inurnment will be held at a later date at Hillgrove Cemetery, Miamisburg.

In lieu of flowers, memorial contributions may be made to Miamisburg Christian Church for their mission fund or SICSA or any local humane society. Condolences can be expressed to the family at www.gebhartschmidtparramore.com.
Published by Dayton Daily News on Oct. 24, 2021.
To plant trees in memory, please visit the Sympathy Store.
MEMORIAL EVENTS
Nov
7
Memorial Gathering
3:00p.m. - 5:00p.m.
Miamisburg Christian Church
OH
Funeral services provided by:
Gebhart-Schmidt-Parramore Funeral Home
MAKE A DONATION
MEMORIES & CONDOLENCES
Sponsored by Gebhart-Schmidt-Parramore Funeral Home.
1 Entry
May God bless you and your family in this time of sorrow.
Nancy Drake
Friend
October 28, 2021
Showing 1 - 1 of 1 results