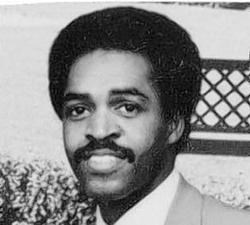 RAINEY, Mark Anthony age 60, of Dayton, passed away on Wednesday, August 22, 2012. He is preceded in death by his devoted mother, Annie Mae Robinson and step-father Eugene Robinson. He leaves behind his father, James Johnson of North Carolina; half-sister, Kyndle Johnson of Washington D.C.; son, Mark Anthony Rainey Jr. of Texas City; (2) daughters, Tianna Rose Rainey and Marcella Antionette Rainey of San Francisco, CA; grandchildren, Sharina Dejanee Rainey, Dante William Woods Jr. and Samaria K'Ann Monique Rainey; and a large family in Ohio, consisting of loving aunts, Alyce Mae Harris and Emma Mays and an uncle, Edward Bryant; and many cousins, whom he grew up with. He left this world unexpectedly, but we will cherish the good times and memories. Funeral services 7:00 P.M., WEDNESDAY, August 29, 2012 (TODAY) at THOMAS FUNERAL HOME, 4520 Salem Ave. The family will receive friends one hour prior to service. On line condolences may also be sent to the family at www.thomasfunerals.com

Published by Dayton Daily News from Aug. 26 to Aug. 29, 2012.
To plant trees in memory, please visit the Sympathy Store.
MEMORIAL EVENTS
To offer your sympathy during this difficult time, you can now have memorial trees planted in a National Forest in memory of your loved one.
Funeral services provided by:
Thomas Funeral Home - Trotwood (Dayton)
MAKE A DONATION
MEMORIES & CONDOLENCES
16 Entries
I was so sorry to hear the sad news of a fellow high school classmate (Nettie Lee Roth). My condolences goes out to the family.
Jo Ann Lovelace
September 10, 2012
Hi All,

Thank you sincerely for the kind words, fond memories, and prayers. it truly makes me happy inside to read these kind messages. I know that many of you had not seen or spoken to my Dad in a long time, but I think we all know he was the same tall guy with a big smile that we all remember.

Tianna Rose Rainey
Tianna Rainey
September 5, 2012
Hello Mark, the memories man. We will never forget you buddy. We have certainly missed you. And now we are going to miss you more. As we know, God has his plan for all of us. We will continue to pray for Understanding, Wisdom and Faith. Our prayers are forever with Ethel, Tianna, Marcella and Family.

With Love,
The Webb Family
September 1, 2012
Falcons forever, Barbara and Roger Davis
Barbara Davis
August 30, 2012
Be Blessed Family...May King Jesus Bless and Keep You!
donald kendall
August 30, 2012
Family of Mark Rainey
My deepest sympathy for the loss of your loved one.
Those we Love remain with us,
for Love itself lives on.
Cherished memories never fade,
because one loved is gone.
Those we Love can never be,
more than a thought apart,
for as long as there's a memory,
They live on in our heart......
Fellow Falcon Class of 70
Carrie Hayes
August 29, 2012
Love you always cuz. May you rest in peace. Bobby lowery
Robert Lowery
August 29, 2012
With love. The lowery family. We will miss you greatly.
Robert Lowery
August 29, 2012
I have never met Mark but I am a good friend to both of his loving daughters, Tianna and Marcy. My deepest sympathy and prayers go out to the both of them and their entire family.
Ebonnie Hopkins
August 29, 2012
I am sad to hear that my big brother from San Francisco passed a week ago. I wish I could attend the funeral today. Mark we had some great times together, you and Sherri were always there for me and allowed me to do everything. I know you are in a better place now my man. The Robinsons/Rainey family was my second family in CA and Ohio. I will hold on to memories shared and I will keep you and your family in my prayers. Craig Wade
Craig Wade
August 29, 2012
I am so sorry to hear of Marks passing. We have lost so many members of our family recently, and it's sad to see another one gone. I haven't seen Mark in a very long time, and it saddens me to know I won't see his face ever again. May God Blessed this family in this our of need. May God put his arms around you and hold you tight. I love you all..
YVONNE HUTSON / REED
August 29, 2012
May you finally rest in peace Tony!!!! Love from the Oxendine family!!
Sheryl Oxendine
August 29, 2012
RIP
Friend
August 29, 2012
Chuck Harris,
We are so sad to hear this news. We grew up with Mark in Residence Park while attending Nettlie lee Roth High School. I can recall so many fun memories shared with Mark and his family during our childhood, those memories will never be forgotten.Please accept our deepest sympathy and our prayers.
Kenneth, Sandra, and Barry Caldwell.
Kenneth Caldwell
August 29, 2012
May God bless you and your family in this time of sorrow.
Lee Hayes
August 29, 2012
To the family of Mark Rainey,
I was saddened to learn of the passing of Mark, and would like to express to you my sympathies and condolences. We were classmates at Nettie Lee Roth, class of '70. Although I had not seen Mark for many years, he was always friendly and a good person as I remember him. I hope he is now resting peacefully, and you are able to find consolation in that.
Falcons forever,
Michael Roger Andrews
Michael Andrews
August 27, 2012
Showing 1 - 16 of 16 results