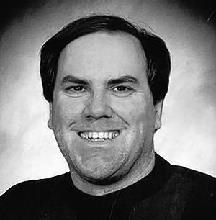 Age 58, of Germantown, passed away August 16, 2021, due to complications from CMT (Charcot-Marie Tooth disorder). He was born in Dayton to Norman and Carol Grant. Mike graduated from West Carrollton High School Class of 1981. He attended Sinclair

Community College earning his Associates degree in 1983, and then went on to Bowling Green State University to earn his Bachelors of Science in education in 1986.

Mike was a software tech support at Manatron and PNC Bank. Later he opened "Your Village Consignment Shop" in

Germantown. Mike was a member of Our Lady of Good Hope Catholic Church and the Knights of Columbus, Council 4587, as a 3rd degree Knight.

In 2006 Mike married his Soulmate and love of his life, Teresa (Karels) Grant. He is survived by his father Norman (Debra) Grant; aunt Marcia Stidham; niece and nephew Katie and Kris Norton; cousins Shanda (Brian) Donnelly and their children Wyatt, Hannah and Carson, and Kelly (Lisa) Grant.

Mike was a lifelong Bengals fan and season ticket holder, and a lover of all sports and a supporter of local teams including the Dayton Dragons, the Dayton Flyers and the Ohio State Buckeyes.

Diagnosed with CMT in early adulthood, Mike remained independent throughout his life. He chose to enjoy life to its fullest even after many medical hardships. Mike's strong-will and optimistic outlook kept him going. He was a marvel to all who knew him.