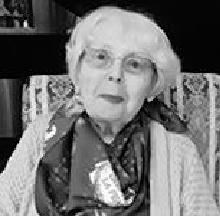 Patricia O'Brien Fischer died on September 5, 2021, at the age of 94. She was born in Dayton, Ohio, and graduated from the University of Dayton in 1948 with a bachelor's degree in

education. As a gifted and

creative writer, she worked as an editor at Pflaum Publishing, Peter Li Publishing, and was the driving force behind

Schuster Center. Her passion for the wellbeing of animals led to generous support of the Animal Humane Society and

rescue shelters for rabbits, donkeys, and monkeys, among

others. Her sharp wit, sense of fashion, and abilities as a

wonderful cook and hostess entertained so many over the years. Patricia leaves behind her sister, Carol O'Brien, Chad Henderson, whom she thought of as a son, and many friends. She leaves us to reunite with her beloved husband of over 50 years, Carl, lost earlier this year. Mass of Christian Burial will be at 12:00 pm on Monday, September 13, 2021, at St Albert the Great Church, Kettering. She will then be laid to rest in David's Cemetery. In lieu of flowers, the family requests

donations be made to Hospice of Dayton. Arrangements

entrusted to Westbrock Funeral Home, Kettering.
Published by Dayton Daily News on Sep. 12, 2021.
To plant trees in memory, please visit the Sympathy Store.
MEMORIAL EVENTS
Sep
13
Mass of Christian Burial
12:00p.m.
St. Albert the Great
3033 Far Hills Ave, Kettering, OH
Funeral services provided by:
Westbrock Funeral Home
MAKE A DONATION
Please consider a donation as requested by the family.
MEMORIES & CONDOLENCES
Sponsored by Westbrock Funeral Home.
3 Entries
Carol, I am so sorry for your loss. For the short time I knew Patricia, she was one fiesty lady. I loved hearing her stories and I am glad I had the chance to meet her. You are in my thoughts and prayers during this difficult time. Love, Renee
Renee D'Entremont
Friend
September 13, 2021
I will always remember Pat with great fondness. She was a great mentor and friend. She inspired my career in Catholic publishing, currently for the Pflaum Publishing Group. God bless all who mourn this fine lady's loss!
Joan (Eckstein) McKamey
Other
September 13, 2021
I'll always remember you and what you taught me about writing, editing, and publishing. May your memory be a blessing to your family and loved ones.
Janet Coburn
Work
September 12, 2021
Showing 1 - 3 of 3 results