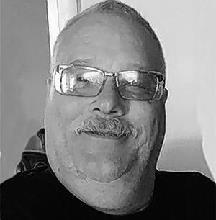 58, of Springfield, Ohio, passed away of October 1, 2021, after a battle with covid. He was surrounded by family and friends, both near and far through phone calls and FaceTime. He is survived by his son, Donald. He is also survived by several

brothers and sisters, including Deidra Eggar and Alvyn aka Skeeter (Paula) Haley. He had several special nieces and

nephews including Cheyenne Montgomery, Tiffany aka Bubbles (Brian) Grieashamer, and Valerie aka Valley Girl (Brian) Bruski. He also had several great-nieces and great-nephews he referred to as HIS

HEATHENS, including Isabella, Kayleigh, Michaela, Caitlyn, Brian, Jonathan, Andrew, and Sadie. He also leaves behind several friends, Kelly, and Keven. He was preceded in death by his father, Gerald Dean Mills, his mother Sharon Neffenger, and second mother, Teresa Joyce Mills. Scott had a HUGE heart and never met a stranger. He also had many close friends who were family to him. A private memorial service will be held at his home on Saturday and Sunday. Arrangements by CONROY FUNERAL HOME.
Published by Springfield News Sun on Oct. 8, 2021.
To plant trees in memory, please visit the Sympathy Store.
MEMORIAL EVENTS
Oct
9
Memorial service
His home
OH
Oct
10
Memorial service
His home
OH
Funeral services provided by:
Conroy Funeral Home
MAKE A DONATION
MEMORIES & CONDOLENCES
Sponsored by Conroy Funeral Home.
3 Entries
So sorry for all friends and family. We had so many great memories of times we shared he was a wonderful friend. I will always miss him greeting me with a smile and a hug every time I seen him.
Audrey Butt
Friend
October 9, 2021
I'm so sorry for your loss my thoughts will always be with you
Violet Pryor
Friend
October 9, 2021
We are so very sorry for your loss, we live just down the street from him, we always enjoyed the Halloween decorations he put out.
Chuck and Sharon Mann
Other
October 9, 2021
Showing 1 - 3 of 3 results