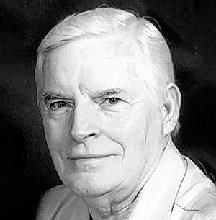 August 8, 2021, at his home, surrounded by his loving family. He was born in Middletown on February 26, 1938, to Vern Brewer and Florine (Overley) Tinch. Ron retired from the

Engineering Department as a tool designer at General

Motors after 33 years with the Company. He proudly served his Country in the United States Navy 10 years active duty as an aviation structural mechanic followed by 2 years in the

Navy Reserve. Upon retirement Ron and Carol moved to Sebring, Florida, and spent 15 years at the Buttonwood Bay Retirement Community playing pickleball and making lasting friendships in the Community. Ron's favorite pastime was working on his sailboat "Tinker Toy" and sailing in the Florida Lakes. Ron was a loving husband, father, and grandparent; he was patient and kind and incredibly talented at anything he ever tried. He taught or encouraged his children in everything they showed interest in. His children inherited many of his qualities. There aren't many instances that his family can

remember him ever getting angry or losing his patience with them. He left a remarkable legacy. Ron is survived by his

Brewer, Ken (Lee Ann) Brewer, and Jeremy (Amber) Brewer; Sister, Sheila (Gary) Gerke; brothers, Joe (Johanna) Tinch, Jim (Sharon) Tinch, and Chuck (Dee) Crawford; eleven grandchildren; Stephanie Rogers, Heather McKanna, Ian Rogers, Brian Brewer, Brooke Brewer, Megan Mendillo, Bradlee Brewer, Wesley Brewer, Connor Brewer, Colby Brewer, and Avery Brewer; six great-grandchildren; and many nieces, nephews, family and friends. In addition to his parents, Ron was preceded in death by brothers, Keith Brewer, Don Knox, and a sister, Delores Wells. Additionally, he was preceded by his great-grandparents Sam and Arthie Isbell who raised him and who he adored. He spoke about them continually to his family. One of his regrets was that his children didn't get to know them. The family will receive friends from 1:00 - 2:00 pm

Saturday, August 14, 2021, at Berachah Church, 1900 Johns Rd., Middletown. Memorial Services will begin at 2:00 pm with Pastor Lamar Farrell officiating followed by a Military Honor Guard. The family would like to send their gratitude to Dr. Kerry Rogers, Nurse Practitioner, Mark Reid, and the Staff at The James Cancer Hospital and Solove Research Institute at the Ohio State University, the Doctors and Staff at the Dayton VA Medical Center, Hospice of Dayton, and all those who cared for Ron. In lieu of flowers, the family asks that memorial contributions be made in Ron's name to the Leukemia and Lymphoma Society Tri-State Chapter, 4370 Glendale-Milford Road, Cincinnati, OH 45242 - OR - PAN (Patient Access

Published by Dayton Daily News on Aug. 12, 2021.
To plant trees in memory, please visit the Sympathy Store.
MEMORIAL EVENTS
Aug
14
Visitation
1:00p.m. - 2:00p.m.
Berachah Church
1900 Johns Rd., Middletown, OH
Aug
14
Memorial service
2:00p.m.
Berachah Church
1900 Johns Rd, Middletown, OH
Funeral services provided by:
Wilson-Schramm-Spaulding Funeral Home Inc
MAKE A DONATION
MEMORIES & CONDOLENCES
Sponsored by Wilson-Schramm-Spaulding Funeral Home Inc.
1 Entry
So sorry to hear about Vern´s passing. But I am great full that I was able to stop by and see him the week before. So many great memories and I can honestly say I never had a single bad one or ever saw him angry. He dearly loved his family and talked about you all often. It was a pleasure and honor to call him a friend. What a great legacy he has left. I will miss running into him at Lowe´s. We often would see each other at the Middletown store.
Mark Smith
August 12, 2021
Showing 1 - 1 of 1 results