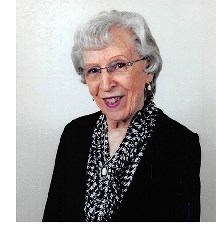 BORN
1931
DIED
2020
DeArliss Ann Gustafson December 11, 1931 - September 29, 2020 DeArliss Ann Swanson, the daughter of Leslie and Berniece (Larson) Swanson, was born on December 11, 1931 in Kiron, Iowa. She attended Kiron country school and high school. While going through school, DeArliss played basketball for the high school girls' varsity basketball team. She graduated with the class of 1949. DeArliss then attended National Business Training College in Sioux City for two years. She met Vernon Gustafson while she was in high school. Vernon was six years older and had younger siblings around Dee's age. They met through one of Vernon's siblings. DeArliss and Vernon fell in love and were married on October 21, 1950 in Sac City, Iowa. They gave birth to two beautiful little girls: Patricia and Melanie. When DeArliss was younger, she developed a love for music. She loved to listen to music, play piano, and sing duets. DeArliss was always playing piano at home, and she loved playing at her mom's, too. DeArliss also liked to read, but in the later years it became harder to do so. When she was able to, DeArliss loved going to bible study groups. She and Vernon were members of the First Baptist Church of Kiron when they lived in Kiron. When they moved to Denison, they both became members of the Denison Baptist Church until it closed. DeArliss was a member of both of the ladies groups at the Baptist churches. She became a member of the Grace Evangelical Free Church after Vernon passed away. A few years after her mom's passing, DeArliss took an early retirement from her 20+ year bookkeeping career held at Crawford County memorial Hospital. She moved out to Colorado to be a little closer to some of her family. DeArliss was a social butterfly at her condo complex there. DeArliss fell a few times while she was in Colorado, and the decision was made to move back to Denison and live at Eventide. She enjoyed the staff and residents there for the few years she was there. On Tuesday, September 29, 2020, DeArliss passed away at the nursing home of Eventide Lutheran Community in Denison at the age of 88 years. She was preceded in death by her parents Leslie Swanson and Berniece Kahler; step-father William Kahler; and husband Vernon Gustafson. Those left to cherish her memory include her daughters Patricia Ahart and her husband Daniel of Denison; and Melanie Ulmer and her husband Greg of Harlan, Iowa; grandchildren Chris, Allan, and Justin Ulmer; and Devin and Paige Ahart; 8 great grandchildren; brother Dr. Doug Swanson of San Diego, California; nieces, nephews, cousins, and friends. On the morning of Friday, October 9, 2020 a graveside service was held at Kiron Cemetery in Kiron, Iowa for DeArliss Ann Gustafson. Reverend Brian Rihner from Grace Evan Galical Free Church was the officiant for the graveside service. The burial of the urn followed the graveside service. Pauley Jones Pfannebecker Funeral Home assisted the family with the arrangements.
To plant trees in memory, please visit our Sympathy Store.
Published by Denison Bulletin Review on Oct. 13, 2020.
MEMORIAL EVENTS
No memorial events are currently scheduled.
To offer your sympathy during this difficult time, you can now have memorial trees planted in a National Forest in memory of your loved one.
Funeral services provided by:
Pauley Jones & Pfannebecker Funeral Home - Denison
GUEST BOOK
1 Entry
Melanie and family, I send my sincere sympathy on the passing of your mother and grandmother. With Love, Caring Thoughts, and Prayers, Kathleen (Miller) Wilcox
Kathleen Miller Wilcox
October 21, 2020