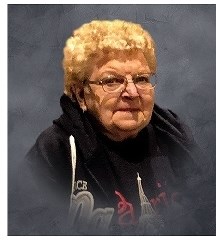 BORN
1941
DIED
2020
Barbara Jean (Delehant) Bernal October 19, 1941 - November 16, 2020 Barbara Jean (Delehant) Bernal, 79, died on Monday, November 16, 2020, at her home in Denison. She was born on October 19, 1941, to Martin and Leone (Johnson) Benedickt in Dunlap, Iowa. She grew up in Dunlap and attended school there, graduating in 1959. After graduation, Jean moved to Omaha, Nebraska and went to work at Mutual of Omaha. Jean married Bill Delehant on January 20, 1962. The couple went on to have two boys, Don and Bill. The family moved to Bridgewater, South Dakota, where Jean stayed busy raising her boys and doing some waitressing. They decided to move back to Dunlap and Jean worked in the nursing home for awhile and then went to Perfection Form in Logan, where she worked for many years. Bill died on November 18, 1992. Later, Jean met Ventura Bernal and the couple were married. They made their home in Denison, Iowa. Jean loved to listen to music. The boys have fond memories of her always dancing around the house. Jean and Ventura loved spending time together at home. She enjoyed collecting things and had a very large collection of dolls. Most of all, Jean had a deep love for her family. Jean was preceded in death by her parents; first husband, John "Bill" Delehant; brother, Joe Benedickt; and sister, Sue Kinnersley. She is survived by her husband of 27 years, Ventura Bernal of Denison; two sons, Don Delehant and his wife Niki of Val Rico, Florida and Bill Delehant and his wife, Liz of Mitchell, South Dakota; four grandchildren, Connor, Elyssa, Jacob and Gabi; sisters, Pat Culver of Mitchell, South Dakota and Lois and her husband Vernon Redler of Ogallala, Nebraska; many nieces and nephews; and many other relatives and friends. A graveside service was held on Friday, November 20, 2020, at the Pleasant Hill Cemetery in Dunlap. Pastor Gene Kline presided over the service. Fouts Funeral Home in Dunlap was in charge of arrangements.
To plant trees in memory, please visit our Sympathy Store.
Published by Denison Bulletin Review on Nov. 24, 2020.
MEMORIAL EVENTS
No memorial events are currently scheduled.
To offer your sympathy during this difficult time, you can now have memorial trees planted in a National Forest in memory of your loved one.
Funeral services provided by:
Fouts Funeral Home
GUEST BOOK
0 Entries
Be the first to post a memory or condolences.