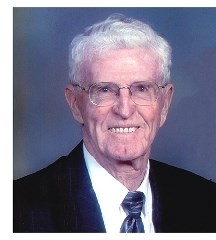 BORN
1930
DIED
2020
Robert E. Curnyn February 17, 1930 - November 21, 2020 Robert E. "Bob" Curnyn was born February 17, 1930 to Thomas D. and Gertrude (Sullivan) Curnyn in Greeley, Nebraska. They moved to Spalding, Nebraska and later to Denison, Iowa in 1938. He went to St. Rose of Lima Catholic School and graduated from Denison High School with the Class of 1948. He then enlisted in the U.S. Army. When the Korean War started in 1950, he was called to active duty. He was the first person recalled to active duty from Crawford County in September of that year. Bob was with the 1st Cavalry Division near the Yalu River on the Manchurian border when Chinese troops entered the war. It was over 30 below zero with deep snow. He worked at the Post Office as a city letter carrier for 37 years. While working for the Post Office, he met Katie Riesselman Podey, and they married in 1968. They raised two daughters, Laurie and Carol. In his retirement, Bob worked for Pfannebecker Funeral Home for another 23 years. He enjoyed daily walks with Katie around town and coffee at Ampride with friends. Bob also regularly volunteered as a Red Cross blood donor and gave a total of 28 gallons. Bob will be remembered as a patient, selfless, and kind person who was dedicated to the church and to supporting his family. Bob passed away on November 21, 2020 at Crawford County Memorial Hospital at the age of ninety years. He was preceded in death by his parents, his wife Katie Curnyn, grandson Brett Christiansen, three brothers and their spouses; Bill and Marita, Paul and Lucille, Joe and Marilyn, and one nephew Tom D. Curnyn. Those left to cherish his memory include his daughters Laurie (Jeff) Christiansen of St. Joseph, MO; Carol (Scott) Brus of Denison, IA; his grandchildren Katelyn (Randy) Deiber; Holly, Andy, and Hannah Brus; Ryan Christiansen; Erin (Tyler) Sten; two great-grandchildren Bryce Deiber and Niall Sten; brother Jim Curnyn and his wife Kathy of Omaha, NE; several nieces, nephews, cousins, and friends. A 11:00 AM Mass of Christian Burial was held on Tuesday, November 24, 2020 at St. Rose of Lima Catholic Church in Denison, Iowa. The Celebrant for the service was Rev. Randy Schon. Ryan Christiansen, Andy Brus, Mike Curnyn, Pat Curnyn, Tim Curnyn, Randy Deiber, and Tyler Sten served as casket bearers for the service. The interment was held at St. Rose of Lima Cemetery in Denison, Iowa following the service. Pauley Jones Pfannebecker Funeral Home was in charge of the services.
To plant trees in memory, please visit our Sympathy Store.
Published by Denison Bulletin Review on Dec. 1, 2020.
MEMORIAL EVENTS
No memorial events are currently scheduled.
To offer your sympathy during this difficult time, you can now have memorial trees planted in a National Forest in memory of your loved one.
Funeral services provided by:
Pauley Jones Funeral Homes
GUEST BOOK
1 Entry
Many fond memories of our times together growing up. Your 35 Chevy took us everywhere. May you rest in peace.
Jim and Mary Vernon
December 3, 2020