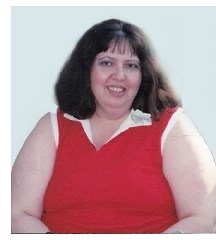 BORN
1962
DIED
2020
Ruth Elizabeth Moritz January 23, 1962 - October 19, 2020 Ruth Elizabeth Moritz was born on January 23, 1962, to Leonard and Loreann (Heller) Akers in Denison, Iowa. Ruth attended high school in Denison. Ruth moved to Butte, Montana to be closer to her family. It was there she and her sister obtained their GED's in the short time of one month, and it was something Ruth was always proud of. Ruth married Paul Moritz on December 7, 1982, in Coeur d'Alene, Idaho. The couple traveled across the western United States and visited many of the National Parks. They also traveled extensively in western Canada. In 1986, they traveled with Hands Across America outside of Gallup, New Mexico. Ruth worked in nursing at different nursing homes around the country. She also worked in the kitchen as a cook at Smithfield. She enjoyed her time working at the Denison Aquatic Fun Center where she taught water aerobics. Ruth was a member of the Christian Women's Club in Denison. She loved to cook and bake; she won several blue ribbons from her breads and cinnamon rolls entered into the Crawford County Fair. She took care of her mother at the nursing home. She was active in animal rescue. Walker and Prancer were her two rescue dogs that she held very close to her heart. Ruth enjoyed reading, especially romance novels. Above all, she loved spending time with her family; especially her nieces and nephews. Ruth passed away at home on October 19, 2020, at the age of 58 years, eight months and 27 days. Ruth was preceded in death by her parents; brothers, Thomas and Earl Akers. She is survived by her husband, Paul Moritz of Denison; siblings, Kathryn (Devlyn) Cooper and Linda Stehr all of Denison, Jody Pullen of Holstein, Iowa, Clinton (Robin) Akers of Eagle Grove, Iowa, and Midgie (Dean) Carstensen of Norwalk, Iowa; nieces, Tammy (Emily) Crouch of Sioux City, Iowa, Nikki (Gerrad) Blume of Castana, Iowa and Megan Plagge of Denison; eight nephews; and many other relatives and friends. Memorials may be directed to The Denison City Pound. Funeral Services were held 11:00 A.M., Friday, October 23, 2020, at the Huebner Funeral Home in Denison, Iowa. Rev. Mike Fillmore officiated the service with interment in the Nishnabotna Cemetery in Manilla, Iowa. Recorded music selections included "My Special Angel" by The Vogues, "One More Day" by Diamond Rio, "Unanswered Prayers" by Garth Brooks and "Live Forever" by The Highwaymen. Serving as pallbearers were Chris Pullen, Tom Plagge, Devin Plagge, Devlyn Cooper, Tanner Crouch and Jaydon Blume. The Huebner Funeral Home in Denison was in charge of arrangements.
To plant trees in memory, please visit our Sympathy Store.
Published by Denison Bulletin Review on Oct. 30, 2020.
MEMORIAL EVENTS
No memorial events are currently scheduled.
To offer your sympathy during this difficult time, you can now have memorial trees planted in a National Forest in memory of your loved one.
Funeral services provided by:
Huebner Funeral Home
GUEST BOOK
0 Entries
Be the first to post a memory or condolences.