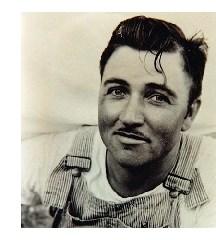 BORN
1922
DIED
2020
Waldo Rickert April 14, 1922 - October 26, 2020 Waldo Herman Henry Rickert was born on April 14, 1922, on the family farm east of Mapleton, Iowa, the son of Edward and Anna (Matzen) Rickert. Waldo began helping with the farm work at an early age. At age 10 he was cultivating corn with a team of horses and a one row cultivator. Waldo attended Cooper No. 7 Country School. After that he helped his father on the farm. On January 2, 1944, Waldo married Genevieve Hahn. They had four children: Douglas, Sandra, Jacqueline and David. Although after 8th grade his own education consisted mostly of self-teaching, he was a firm believer in the need for education. Waldo served several terms as a member of the Cooper Township Trustees. He also served on the Monona County Extension Council and the Maple Valley School Board. After he retired from farming he and his brother-in-law, Francis Hahn, began building toy pedal airplane parts for pedal planes designed by Marvin Hoppenworth of Aviation Products Company of Cedar Rapids, IA. Waldo made hydraulic machines to stamp out parts made mostly of electrical conduit. He really enjoyed this work and Marvin called him "the engineer who made a living farming." He is survived by his children Douglas (Terrie Baker) Rickert of Raleigh, NC, Sandra (John) Allender of Sioux Falls, SD, Jacqueline (Tom Morgan) Rickert of Mondamin, IA and David (Cindy) Rickert of Ames, IA; 6 grandchildren and 12 great-grandchildren. Waldo was preceded in death by his wife Jenny Rickert, and sister Wilma (Conrad) Wasmund.
To plant trees in memory, please visit our Sympathy Store.
Published by Denison Bulletin Review on Oct. 30, 2020.
MEMORIAL EVENTS
No memorial events are currently scheduled.
To offer your sympathy during this difficult time, you can now have memorial trees planted in a National Forest in memory of your loved one.
GUEST BOOK
0 Entries
Be the first to post a memory or condolences.