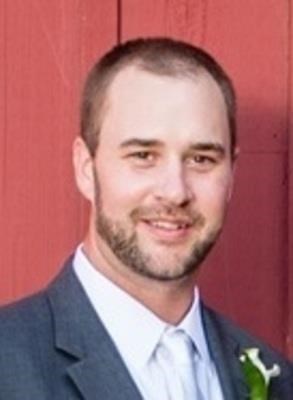 Brendan provided much light, warmth and humor to family and close friends. He could make you laugh with his quick wit as well as show sincere, perceptive empathy for others. When 3-year old Brendan thought his grandfather, BB, was only getting a cupcake for his 65th birthday, Brendan lobbied loudly for a "real" cake on BB's behalf. Brendan gave a toast/roast at his brother Bill's wedding that would be a hit late night TV monologue. Brendan knew how to win the best uncle contest with his nephew by carrying Macklin on his shoulders or giving him the coolest, biggest truck for Christmas.

Brendan loves his wife Katy and enjoyed their new home together preparing the swimming pool, grilling on the deck and hiking in the wooded park behind them. Brendan liked playing golf with his dad and brother. When his game was on, pars or better were possible on every hole. When his game was off, Brendan's good nature was still great company. When playing Frisbee golf with Katy's dad, James, Brendan made it fun no matter where the disk landed.

Brendan graduated from Wilmington University with a finance degree and had a successful career as a senior accountant. Brendan was a good neighbor at work or at home lending a hand to anyone who needed it often without being asked.

There is so much more to Brendan's life that can be captured in so few words. He has lived a full, good life.

Brendan is succeeded in life by his father (Barry), his mother (Rosemary), wife (Katy), brother (Bill) and sister-in-law (Christie). He is also survived by loving grandparents, Vincent and Elizabeth Sullivan, uncles, aunts, cousins, nieces and nephews.


Published by The News Journal from Oct. 25 to Oct. 27, 2017.
To plant trees in memory, please visit the Sympathy Store.
MEMORIAL EVENTS
Oct
27
Memorial service
4:00p.m.
Mountain Christian Church
1824 Mountain Rd, Joppa, DE
Funeral services provided by:
Schimunek Funeral Home
MAKE A DONATION
MEMORIES & CONDOLENCES
Sponsored by Schimunek Funeral Home.
28 Entries
I am so sorry for everyone's loss especially my wonderful friend Rosemary ❤
Bernie Henderson
November 19, 2017
We just heard about Brendan's passing and we are so sorry! It breaks my heart to know that you have lost such a young vibrant son with his whole future ahead of him. We will keep you in our thoughts and prayers.
Donna and Frank Rowe
October 31, 2017
I send my deepest sympathy to the family. May the "God of all comfort" be with you in your time of grief.
A.J
October 29, 2017
We are so sorry to hear of this news and saddens our family

Brendan had a since of shyness while growing up at St Edmond's with our son Always had a smile on his face.

You will be missed by those hearts you have touched.

Our prayers are with you all

The Delle Cave family.
Delle Cave family
October 29, 2017
So sorry for your loss. Prayers are with you Kathy. And family members. .keep in your heart the years of Brendan,
October 28, 2017
Brendan I wish I could've said goodbye- but it's not bye- it's see you later- xoxo Frank - you will be missed by us all! Rest in Paradise my dear friend! Love, Amy
Amy Wallace
October 28, 2017
I am truly sorry for your loss. May you take comfort in knowing that God is close to the brokenhearted, and others are praying in your behalf.
Pat
October 28, 2017
Brendan, It breaks my heart to know you are gone. You saved my life and I will be forever grateful! Rest easy my friend! Forever in my heart! Dee
Dee D
October 27, 2017
So sorry for your lose.
William Becker
October 27, 2017
Brendan, so sorry I never had the opportunity to meet you because I know you were a wonderful man. My heart goes out to Katy who will miss you so much. Rest In Peace and watch over Katy.
Nancy Umberger
October 26, 2017
Brendan,

It was a pleasure working with you at Ashley. We all have fond memories of you so know that you will be missed. Watch over Katy.

Mariann
Mariann
October 26, 2017
We all were saddened by the news of Brendan's passing.

I worked with Brendan at Ashley and enjoyed his humor and sparkle. Brendan you will be missed by many.

May God be with your family and I wish you and your family peace.
Brenda Roberts
October 26, 2017
I had the pleasure of gaining Brendan as a friend and neighbor. Brendan and I hit it off on the day he moved in. He was the perfect mix of friend. He encouraged me when I was down, joked me when I messed up, and helped me ANY time I needed or asked.

One thing that stands out for me is when I had a work event that required me to play golf...I never played before and without hesitation Brendan taught me how to play as well as let me use his clubs! I was asked back over three times that year. He would say that it was just natural for me but without him I would have been embarrassed.

My wife loved that I had Brendan right across the street, she saw that he was someone I just clicked with. I was able to talk to him about everything and knew I wasn't being judged. He was so genuine.

When I was alone I knew I could call him and he would do anything with me because he understood me so well. We would walk the neighborhood and talk about how much he liked Katy's dad or what was going on at work and for that time I would forget everything stressful and just have a great time with a great friend.

He bought a flashlight that had a Taser on the back side for Katy and he wanted to see if it was strong enough so like every wise men we decided to agree and try it on each other...

These are the things that I will miss the most about him besides his goofy laugh and late night conversations about the galaxy.

I love you man. I hope you felt how much you meant to me.
David
October 26, 2017
i worked with Brendan, and he was always "present" to conversations, friendly, and especially caring. I have missed him at our work tremendously, and have often thought of him! i know he loved his family dearly! His gentle soul is at rest! I pray comfort for family and friends!
October 26, 2017
I am extremely saddened to hear the news of Brendan's passing. I will always remember him as a kind man with gentle quiet nature. He was always quick with greeting and smile. My heart breaks for you loss especially for you Katy and Brendan's parents. May you feel the peace and comfort of God and may God hold you all and Brendan in the palm of his hand.
Betsy Murphy
October 26, 2017
One of the nicest people I have met.
William Pitts
October 26, 2017
Much to young to be gone, may fond memories come to mind in the days to come, and may you find hope and comfort in Gods future promise found at Isaiah 35:8, you have my deepest condolences.
R L
October 25, 2017
Sorry for your loss may you draw comfort from Gods word at Hosea 13:14. L Ohio
October 25, 2017
My sincere condolences to family and friends. May the God who binds up the brokenhearted and comforts all who mourn, sustain your family during this difficult time - Isaiah 61:1, 2.
Mrs. Lynch
October 25, 2017
Katy, Rosemary, Barry, Bill, We are so sorry for your loss. We send our deepest sympathy, prayers, and love to your family.

The Romanczuk Family Romanczuk
Classmate
October 25, 2017
It is never easy to expierence the loss of a dear loved one I am really sorry about the loss of your dear husband.may the beautiful memories you shared continues to blossom .
October 25, 2017
I'm so sorry for your loss. Please find peace and comfort in knowing God cares for you and will help you in your time of need. Jeremiah 29:12 "you will call me and come and pray to me and I will listen to you."
October 25, 2017
My sincerest sympathy to Barry and Rosemary. You and you family are in my thoughts and prayers. Love, Terry Vaccarino
Terry Vaccarino
October 25, 2017
Rosemary, Barry, Billy and family our thoughts and prayers are with you all. Love, John and Karen Cummings
Karen Cummings
October 24, 2017
Love & Light to all who knew & loved Brendan, especially his dear wife Katy Cobb. May peace find your heart in the future. Deepest Sympathy.
Sarah Forame
October 24, 2017
Brendan, my friend. You made me laugh every single day at work. Thanks for being my friend. I will miss your smile. My heart hurts for Katy and your family. I wish them peace and comfort.
Lori Schulz
October 24, 2017
My heart goes out to Katie and the entire Cobb family.
Laura Wingate
October 24, 2017
Brendan, you were a great friend right off the bat. Accepted me with open arms when I started at Ashley. I will miss you so much. BBobb and Baby Bird always. Rest easy, my friend.
Jessica Schulz
October 24, 2017
Showing 1 - 28 of 28 results