Born in 1922 in Waidhoven a.d. Ybbs, Austria, she fled war torn Europe as a young woman, marrying William Berryhill, an American officer, and making a home in Charlotte, North Carolina eventually moving to Wilmington, Delaware. She was naturalized as an American citizen in 1949, embracing the roots and successes of our political system.

She fought tirelessly against nuclear power for the last decades of her life based on the premise that spent fuel can be deadly to untold future generations. She chaired the Coalition for Nuclear Power Plant Postponement for 20 years and testified before local, state, and federal officials armed with wit and impeccable details. She was instrumental in stopping the construction of a nuclear power plant in Delaware and was testifying as late as July 2010.

Her experience of war and Nazi nationalism led her to protest the Patriot Act. She marched in Washington D. C. and could be seen protesting in local vigils against the recent wars.

She is survived by her children: William Wallace Jr., wife Denise of Alpharetta, GA; Linda Marie Vrooman, husband Pat of Elkton, MD; Sue Trotman, husband Geoff of Wilmington, DE; and John B., wife MJ, and her grandsons Alex and Mack Berryhill, William Trotman and stepgrandchildren Rick Trotman of Stamford CT, and Heather Trotman of Wilmington; among many nieces, nephews and great-grandchildren. She is also survived by her sister Ellie Carrick of Christchurch, England.

Visitation will be held on Friday, July 6 from 6 to 8 pm at the Doherty Funeral Home, 3200 Limestone Road, Wilmington, DE where a memorial service will be held Saturday, July 7 at 11 am.

Published by The News Journal from Jul. 1 to Jul. 2, 2012.
To plant trees in memory, please visit the Sympathy Store.
MEMORIAL EVENTS
To offer your sympathy during this difficult time, you can now have memorial trees planted in a National Forest in memory of your loved one.
Funeral services provided by:
Doherty Funeral Homes, Inc. - Pike Creek
MAKE A DONATION
MEMORIES & CONDOLENCES
16 Entries
Frieda was a transformational activist unlike any i have encountered. It was my fortune to have her as my 4th guest on "The Exploration of Consciousness". Because of her dedication and selfless devotion to possibly the most important issue facing humanity as a whole today (nuclear fission), her inspiration reinspired me into action. Words alone cannot convey the importance of her existence and the beautiful caring heart that she was. To you dear Frieda, you are a light that will never go out.
matt presti
July 9, 2012 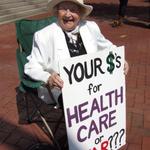 June Eisley
July 8, 2012
I consider myself blessed that Frieda was one of my mentors. I was given a great gift to have her as my friend.
Rosie Volpe
July 6, 2012
She was one of a kind, devoted to her cause and helpful to me as I found my way around Delaware government. She was warm, focused and deserving of all our admiration and respect. Thank you Frieda for all you did for us.
Councilwoman Joan Deaver
July 6, 2012
I am getting choked up reading the wonderful expressions of love for Frieda.

She was truly a one-of-a-kind and all who knew and loved her are going to try to keep that kind-ness alive in our own ways.
Nancy Willing
July 5, 2012
From the age of 15 to 34, Frieda was, in many ways, a second mom to me. After that, she continued to be a steadfast anchor in the world for my sons- Alex and Mack Berryhill. She was a huge part of our lives, she was an inspiration. She lived out the quote: "Live your life in such a way that when you are gone, your children will know you stood for something wonderful." Forever in our hearts...Peace be to her memory.
Tracy Dickerson
July 4, 2012
Linda and family,

When you and i met at a high school reunion a few years back, after Not seeing each other since graduation, who did we talk about, but your Mother of course. She was truly an inspirational person, and I can say she was a positive influence in my life. To get involved, stand up for what we believe in and care about our environment.
Wayne McCulloch
July 2, 2012
WOW! Where do I begin. Growing up just down the street and being around Frieda for so many years I have significant memories of just how strong and determined this woman was. As passionate as she was for her cause, she was an excellent mother and ever so passionate about her children. She was always warm and welcoming and she remained graceful in all she did until her last days. What a wonderful woman - she left her mark on this world and I truly believe that she will be missed. God bless you Frieda - I am ALREADY missing you very much.
David Resende
July 2, 2012
to Linda and all the family, my condolences.
Gary Irving
July 2, 2012
Sue, Geoff, and Family,
What great children your mother raised. You are carrying the torch of an experienced, aware, beautiful woman.
Heather (Douthit) Sneeringer
July 2, 2012
Freida was one of the most "straight up" and honest people I've ever known...She certainly NEVER Beat Around the Bush! Her warm smile and piercing intellect will remain in my memory forever. I am lucky to have known her.
Jim Travers
July 2, 2012
So many wonderful memories I have of Frieda....how you put up with all of us tramping in and out of your house during those high school years! But, ALWAYS a smile and a twinkle in your eye....except when we were REALLY in trouble and then the accent would get thicker and you would look so disappointed. There was not a more gracious, loving and CLASSY woman to be found. She was a role model for every young woman. I was so privileged to know her and love her...and be loved by her. My deepest condolences to you all....love and prayers, Dias
Diane Plumley
July 2, 2012
Sue, Geoff & Family
Our good and positive thoughts and prayers are with you.
Charlotte Donovan Kabaci
July 1, 2012
She is always an inspiration. Each time we know that not all of us will return to us at the next peace gathering, but Frieda will be there in spirit.
I wrote the following for the first and final words for today's Sunday service:
Beginning:
we come.
Singly or together
to join ourselves
in this space for worship.
We draw ourselves in
as the body draws in the breath of life.
We draw ourselves together,
resting our souls in this place and on each other.
We draw ourselves together,
with our greater church and our humanity.
We come.

Ending:
We go
As we have come in we go out,
Hoping that we will all return.
As all our ancestors came out of Africa
our souls go out into a world full of terror and delight.
We go out
as the body must breathe out to live
and see the new day.
We go.
John Atkeison
July 1, 2012
Linda and family, I am so sorry for your loss.
Nancy Kelly
July 1, 2012
My dear, dear friend of 39 years. Having her gone from my life leaves me filled with sadness. My deepest thoughts are with all her family and especially to Sue and Linda who took such loving care for her at the end.
June Eisley
July 1, 2012
Showing 1 - 16 of 16 results