Jerry was born in Wilmington, the son of Rachela Carroccia Russo and the late Louis V. Russo II and graduated from Salesianum High School. Jerry received three degrees in economics: B.A. from George Washington University in 1977, M.A. from University of Delaware in 1981, and Ph.D. from Northwestern University in 1989. Jerry joined the faculty of the Department of Economics, University of Haeaii-Manoa in 1987 and quickly became the state's premier health economist.

For many years Jerry held a joint appointment as a Fellow at the East-West Center's Program on Population. His lectures on health economics provided inspiration and challenges to hundreds of young academics and government officials working in the field of health care.

A Mass of Christian Burial will be celebrated on Thursday, December 23, at 11 am, at St Ann's Catholic Church, Gilpin Avenue & Union Street, Wilmington, DE 19806. Interment will be private.

In lieu of flowers, contributions may be made to University of Hawaii Foundation, 2444 Dole Street, Bachman Hall 105, Honolulu, Hawaii, 96822. For online condolences,

(302) 478-7100
Published by The News Journal from Dec. 21 to Dec. 23, 2010.
To plant trees in memory, please visit our Sympathy Store.
MEMORIAL EVENTS
To offer your sympathy during this difficult time, you can now have memorial trees planted in a National Forest in memory of your loved one.
MAKE A DONATION
MEMORIES & CONDOLENCES
Sponsored by anonymous.
15 Entries
Dr. Russo was one of my favorite Economics professors. I apologize, I did not know. I only wish I could thank him again for his advice and attention.

Arlene Tanalgo
arlene tanalgo
December 7, 2013
Very sad to hear about this. Just heard it from my former colleague at the East West Center..Sincere condolences to his family and the Department of Economics, University of Hawaii.
Gnanaraj Chellaraj
January 4, 2011
My deepest condolences for the family of Professor Russo. He was a kind, light-hearted person and an excellent teacher. Professor Russo was my academic advisor while I attended UH Manoa for my undergrad years, and I will always be grateful for the meetings we had towards my final days before graduation, and all the valuable advice he gave me on school, jobs, and life. I am proud to have had him as my teacher and mentor, and all of us who were priviliged enough to have known him will miss him dearly. 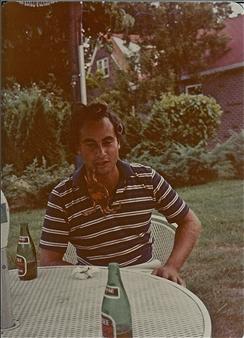 "Suspended in disbelief" is how the Monsignor described it at the service, that's about right. Jer was larger than life, almost true, the people he touch loved him, not a bad bone in his body. He was my longest friend, Rae, his mother introduced us when he was 5 and I was 6 only to carry on for 50 years. We will sorely miss him, T. Haugh
Tommy Haugh
December 31, 2010
" I am deeply shocked and saddened knowing very untimely passing away of Professor Russo. He was a great professor and mentor. I will always remember for his kind support and encouragement during my academic program as a graduate student at the University of Hawaii's Economics Department. The loss is unacceptable and very hard to bear to anyone. My sincere condolence to the bereaved family.

My thoughts and prayers are with you Dr. Russo."

Naresh C Pradhan, Long Beach, California
Naresh Pradhan
December 30, 2010
Jerry had been a good friend and collleague. I miss him with his big smiles and laughs already. My sincere sympathy to the family.
Minja Choe
December 28, 2010
Jerry, a good and interesting man. We're already missing you so much.

I remember how much fun you were - that combination chuckle/laugh, but always ready with a kind word, too.

Thanks for everything you did professionally for UH students and faculty. I think you made a difference in their lives.

My great sympathy to Mary and Lexy.
Janet Mason
December 26, 2010
Jerry and I were close friends for many years. His death is a great loss for the department, the economics profession, and especially for me. Jerry was part of my everyday life at the University. Many mornings I heard his booming voice from the office next door as he advised his students in their studies and often the greater challenges of life. We liked to walk over to get a cup of coffee at the business school, usually with Sang-Hyop and Sumner, talking about the latest health care issues, university politics, or our daughters. He was very proud of Lexie, that she had gone off to Barnard, was building new friendships, and making a successful transition to adulthood.

Jerry contributed to the department in many ways. He was chair of the graduate program while I was department chair and he was a great help to me. He had a thorough understanding of the university and how to get things done. If an exception to a rule was needed or some extra financial support for a student, Jerry could get it done. He was a terrific department chair and we prospered under his leadership.

My best times with Jerry were working with him on East-West Center projects in Asia - Indonesia, the Philippines, and Pakistan. We enjoyed traveling together, made many friends and did some good work, I think.