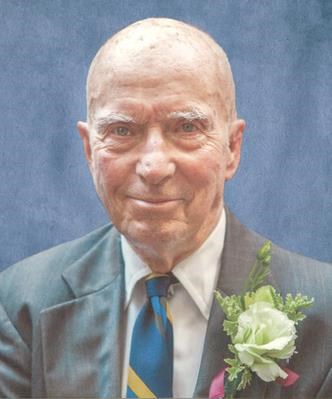 Hockessin - Harry Russell, 92, passed away peacefully Feb. 2, 2018 at Cokesbury Village, Hockessin with his loving family by his side. Mr. Russell was born in Mason City, Iowa to Harry Russell, Sr. and his wife, Netta. He had two sisters.

His love of music began in the 4th grade when he played the trumpet in the Drum and Bugle Corps. He had a paper route through High School and played in the Mason City High School Band. After graduating, he left immediately to serve in the Navy during WWII. He was a radio technician and was in the Okinawa Invasion. He served on the ship for a year while peacemakers used it as a hotel.

He mustered out in July 1946, came home, and that very night met his future wife, Evelyn Sharp. He attended Iowa State College studying to be a chemical engineer. After finishing college, he worked for the DuPont Company at a cellophane plant in Clinton, Iowa for 10 years. Their three children were all born there.

In 1960, Harry was transferred to Wilmington, Delaware and continued working for DuPont for 15 more years. When he retired from DuPont, he started his own business making plastic bags for industry. He worked tirelessly for 40 more years before finally retiring at age 87. In the 60s, Harry developed a passion for group long distance bike tours all over the country and was a member of White Clay Bicycle Club for 20 years. He also enjoyed the arts and was a generous supporter and great friend of the Grand Opera House and the Delaware Symphony Orchestra.

When Harry was 85, he and Evelyn moved to Cokesbury Village where for two years he enjoyed the beauty of the area. He spent his last three years in the Health Center enjoying his wife's loving attention.

The family would like to thank the staff of the Nursing and Health Care unit for their love, compassion and kindness in Harry's case.

Friends are invited to a Celebration of Life for Harry on Friday, February 16th at 11 am in the Cokesbury auditorium. In lieu of flowers, the family suggests a contribution in Harry's name to the Grand Opera House or the Delaware Symphony Orchestra. His burial will be private.

I'm sorry I was unable to attend Harry's service. I found Harry to be such a sweet, mild-mannered, "gentle"man. It was a pleasure to help care for him. And of course, those eyes! And you and your family members are a pleasure to know. My thoughts and prayers are with all of you.
Katie McCabe - unit clerk, Health Care Center, Cokesbury
Katie McCabe
February 19, 2018
Evelyn and Family, You are in our prayers.
We have so many fond memories of Harry at North Star pool. Harry was so active and innovative in his various endeavors. May your hearts soon be filled with wonderful memories of joyful times together as you celebrate a life well lived. Jeffers and Norris families
Mary Norris
February 16, 2018
Harry provided fond memories of Clinton Film. Jackie and I regret we can't attend the services Evelyn, but rest assure that you are in our prayers.
Jackie & Paul Sample
February 16, 2018
Heaven gained another angel
Trish Duphily
February 15, 2018
My heartfelt condolences to the Russell family on your loss. Such a wonderful sharing of his life and interests and WWII experience, and his love for the arts. May he rest in peace. And may the caring and love of family and friends heal your hearts. I am thinking of you all as is the rest of the Miller family.
Lori Miller
February 14, 2018
I am very saddened for the passing of Mr. Russell. I enjoyed our many dinners together at Cokesbury and Mrs. Russell sharing many of your memories together. I am so glad I got to know you.
Trish Duphily
February 13, 2018
Harry was a wonderful man. We led the MS rides together for the White Clay Bicycle Club for many years. He was always kind and patient. He made riding really special for me and I will always remember him.

Darree
February 11, 2018
Evelyn,
I'm sending you and your family many hugs. A friend just sent a text message telling me that Harry, wonderful Harry, had passed away. We had so many wonderful memories. Sailing in the BVI with you and Harry, my mom, my brother David and Muff and Don. Also great times at the Lincoln house, and in Lewes at the beach. I remember Harry's great pancakes in the morning. What a treat! Unfortunately we will miss the celebration for Harry since we will be out of town that week. Much Love to everyone, Barbara & Michael
February 11, 2018
I had the pleasure of knowing and working with Harry for several years. We were closely associated in the cellophane business at DuPont Co and stayed in touch after he started running his own business. He was a kind gentleman.
Dick Davis
Dick Davis
February 11, 2018
Showing 1 - 9 of 9 results