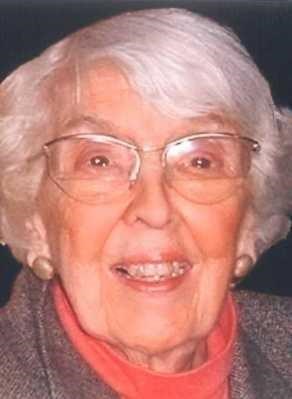 Mrs. Elwood was born in 1926 and graduated from Edward Little High School in Auburn, ME in 1943. She spent two years at Bates College in Lewiston, ME before graduating from the Rhode Island School of Design in 1949 with a B.F.A. For seven years, she designed children's dresses for Rosenau Brothers in Philadelphia and New York for Joseph Love Inc. in New York where she was head designer, and later did freelancing for both Boston and Philadelphia houses.

In June 1954, she married Frank P. Elwood of Philadelphia, and they shortly moved to Cambridge, MA while he attended MIT.

She was a member of Concord Presbyterian Church in Wilmington where she organized and developed the current church library and helped run the Emmanuel Dining Room program of the church. She was previously active in the First Presbyterian Church in Pitman, NJ and was program chairman for the Turnersville NJ PTA, as well as co-chair of a committee which started the first Adult School classes in the township.

When the family moved to Wilmington, she was a nursing home volunteer, leading hymn sings and bible study, a Lay Advisory chairman during preparation for desegregation with the Alfred I. Task Force, and tutored in the Reading Assist program.

Over the years, she designed and sewed extensively for herself, her daughter, and her mother, who was known in Auburn and Lewiston for her Central Maine Power Company cooking schools.

The Elwoods turned to trailer travel, which they did for thirteen years all over the United States and most of Canada.

After 38 years in Wilmington, they moved to Maris Grove in Glen Mills, PA. There she was co-editor of the resident newspaper, and taught repeated classes in Writing Your Memoirs, and writing extensive tales of her own life and career as well.

Besides her husband, she leaves two children, Elizabeth Gates (Melissa) of Buxton, ME and Keith (Maria) of Victoria, BC; three grandchildren, Sarah, Cameron and Peter Elwood; brother, Dr. Willard Richan of Chester, PA; and four nieces and nephews: Amie, David, Bonnie and Peter.

Funeral services will be held at 11 am on Friday November 15, 2013 at Concord Presbyterian Church.

In lieu of flowers, please give a gift to Friendship House with a check sent to Concord Presbyterian Church, 1800 Fairfax Boulevard, Wilmington, DE 19803.


To plant trees in memory, please visit our Sympathy Store.
Published by The News Journal from Nov. 13 to Nov. 14, 2013.
MEMORIAL EVENTS
No memorial events are currently scheduled.
To offer your sympathy during this difficult time, you can now have memorial trees planted in a National Forest in memory of your loved one.
Funeral services provided by:
Chandler Funeral Homes & Crematory
MAKE A DONATION
MEMORIES & CONDOLENCES
1 Entry
Frank, Liz and Keith: I will never forget Janet. She made everyone smile and was a real gem! We loved reading her book about her life as a designer. My Mother, Mary Vande Walle, misses her dearly. She made a real difference in our lives. I know you will miss her terribly. Love and prayers are sent your way.
Suzanne Broyles
November 13, 2013
Showing 1 - 1 of 1 results