Robert Campbell
Robert Campbell, 58 Robert Campbell, 58, died in Philadelphia on Friday, July 9, 2011, after a prolonged hospitalization. Robert served as pastor at Tully Memorial Church since 2005 and as a Presbyterian minister for over 30 years. Passionate about his faith and helping others, Robert was also a devoted husband and caring father. Robert and his wife Debby met in college at Ohio Wesleyan University and were married for 35 years. An avid theologian and eternal student, Robert earned a Master in Divinity from Fuller Theological Seminary and later a Doctorate from Pittsburgh University. He raised both of his children in his strong faith and ingrained in them both his values and sense of humor. Robert was as passionate about life as he was about his faith. Any person acquainted with Robert would not be surprised if he broke into song from Monty Python or a detailed debate on church doctrines. His warm smile and big hugs will never be forgotten, nor will the love and warmth that he shared with so many. Survivors: His wife Debby; son James; daughter Elizabeth; parents Frank and Jacqueline; brothers Don, Allan, and Ian; sister Cathy. Memorial Service will be held on Friday, July 15, at 10 AM at Tully Memorial Presbyterian Church, located at 126 Sharon Ave. Sharon Hill, PA 19079.

To plant trees in memory, please visit our Sympathy Store.
Published by Delaware County Daily & Sunday Times from Jul. 13 to Jul. 14, 2011.
MEMORIAL EVENTS
No memorial events are currently scheduled.
To offer your sympathy during this difficult time, you can now have memorial trees planted in a National Forest in memory of your loved one.
MAKE A DONATION
MEMORIES & CONDOLENCES
18 Entries
We recently moved to Princeton, NJ, and it occurred to me that I might reconnect with Bob, not having been in contact for a few years. Upon doing an internet search, I found a notice of his obituary, but could hardly believe it and couldn't access the site all day yesterday. I now see that it is true and am very sad.
The times we worked together in Oneida were full of rich discussions and supportive personal interactions. I greatly respected his personal and intellectual integrity.
My sincere condolences to all his family.
Joyce Irwin
March 27, 2012
Deb, I am sorry for your loss. I just heard from Marge today. I think of you often. Carol
October 27, 2011
I was going to call Pastor Bob and discovered he had passed. I am so sorry for you loss and he will be remembered fondly.
Carol Cashwell-Badeaux
October 12, 2011
The Campbell family were our neighbors in Madison and Bob was my best friend in the grammar school years. How many 100's of hrs did we play, laugh, cry and break bread together? He was always a good - hearted guy and matured into a fine man who loved God and served his community selflessly. I am a better man for having known him and his loving devotion made the world a better place! I offer my heartfelt condolences to the Campbell family and friends. Big Love & Gratitude to you Bob!
Your Brother in Christ,
Geordie Numata
Geordie Numata
August 3, 2011
Dear Debby, Jamie and Lizz, We are so saddened and shocked to learn of Bob's passing. Words cannot convey our shared pain. We were blessed to have Bob and your family here in Oneida. Kevin and I appreciated his ministry and leadership. He will be greatly missed and may The Angels hold you and keep you through this difficult time.....our Scotty will welcome him in Heaven.
Love Kevin and Linda Bailey
July 30, 2011
To the Campbell Family,
I am so saddened to hear of the passing of Bob. He and I graduated from MHS in 1970 and I had the pleasure of seeing him again at our class reunion in 2010. We were friends on Facebook and I looked forward to reading his warm, insightful words. He will be missed by all whom he touched.
Robbin Sweeney McMath
July 26, 2011
I had not seen any postings on Facebook from Bob for a while so this morning I went to his page. I am saddened and shocked to learn of his passing. Bob was a wonderful teacher and I learned so much when I attended his Bible studies when I lived in Sharon Hill. My condolences to his family. I hope that you take comfort in knowing that he is in perfect peace with his Lord and Saviior Jesus Christ.
Pat Clarke
July 26, 2011
Dear Campbell Family,
I send sincere condolences in the loss of your husband and father. I was a classmate of Bob's from Madison and we became re-acquainted on Facebook. I enjoyed meaningful conversations with Bob on the topics of theology, history, politics, culture, and art. I will miss hearing the important and heartfelt "voice" he raised to life's cherished topics and will remember his words and wisdoms.
Ruth Greene-McNally
July 26, 2011
Dear Campbell Family,
We cannot feel life's losses without first feeling the blessings of its fullness. Please accept my sincerest condolences. I was a classmate of Bob's at Madison High School; we recently connected on Facebook. I shall miss his wit.
Karen Pellow
July 26, 2011
Dear family members I consider Bob a real friend and blogging buddy who always had a good word to say to and for everyone. Now he is with our Lord and full of his peace and joy. I will miss reading his kind words. I am so sorry. Viola Larson Sacramento.
Viola Larson
July 20, 2011
Lizz,
We are so sorry to hear about the death of your father. We send you a big hug and our prayers and thoughts are with you and your family. I hope all your great memories of your Dad will carry you through today. All our love.
Connie Miller
July 15, 2011 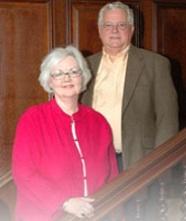 I will never, ever forget Pastor Bob's kindness shown to my family just 3 months ago, when we lost my father-in-law, Kermit Walton. I remember thinking how lucky Tully was to have him, and what a kind and wise man he was. I had many people of different faiths come up to me after the funeral and say "If he was at my church, I'd go to church more often."

Please know you are all in our prayers at this horrible time.
Lori Walton
July 14, 2011
I am so sorry for your loss. Rev. Campbell served as moderator for Darby Presbyterian for a few years. He was always very kind and patient with us. I kidded him at one of our session meetings that he "grew on me". He had such a great sense of humor. May God Bless you.
Teri Brewer
July 13, 2011
Uncle Bob, the world will not be the same with out you but heaven will be a much better place knowing you are waiting for us. I am very sad and miss you. I still can't believe you are gone. Love you always!
Christine Sanducci
July 13, 2011
Sorry for your loss Lizz.. My prayers and thoughts are with your family in this time of need. Joanne Dietzel
July 13, 2011
My condolences, Liz, to you and your family.