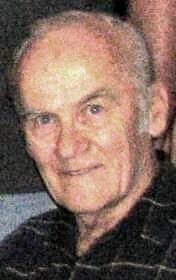 During the Korean Conflict he served in the U.S. Air Force. A resident of Ostrander for over 50 years, he had worked as a heavy truck mechanic for Humphrey Ford and as a quality control inspector with Delo Screw Products. He also operated his own trucking company, serving the needs of several area contractors. He retired in 1998 from GE Super Abrasives, where he worked as a diamond press operator and invented several new ways for GE to operate.

A man of deep and abiding faith, he was a long time member of Valley View Evangelical Friends Church. He served countless years as a trustee, church board member, Sunday school teacher, stewardship elder, bus operations specialist and mechanic, as well as participant of the annual men's retreat.

He served on the Ostrander Village Council for 13 years until this past January, also in the capacity of President.

Jim could fix anything, at work, home or church, he did it all. He enjoyed camping and was happiest outdoors. Mechanically inclined, he treasured his 1967 red Mustang, which he rebuilt from top to bottom. Jim was the gifted teacher, chief problem solver, and rock of his family. Jim was a peacemaker when anything was amiss.

He enjoyed sharing the stories of his younger years with the grandchildren. His life stories from working a mule team on the childhood farm to operating modern equipment of today. God and his family were most important and he was one who looked forward to sharing hugs.

Jim was talented in every way and his boys remain as his lasting legacy and of whom he was most proud.

In addition to his parents he was also preceded in death by his twin sister Patricia Blaney, sister Mary Hinnershitz, and stepfather Frank Sommer.

Friends may call 1-4 and 6-8 p.m. on Wednesday at the Snyder-Rodman Funeral Center, 1510 W. William St. at Valleyside Dr., Delaware where services will be held 2:30 Thursday with Rev. Joshua Walker officiating. Burial will follow in Fairview Memorial Park with military honors provided by the Delaware County Veterans Assoc.

Memorial contributions can be made to the Valleyview Evangelical Friends Church, 868 W. Williams St., Delaware, OH 43015.

Condolences may be expressed at www.snyderfuneralhomes.com.

Published by The Delaware Gazette from Apr. 28 to Apr. 29, 2014.
To plant trees in memory, please visit the Sympathy Store.
MEMORIAL EVENTS
To offer your sympathy during this difficult time, you can now have memorial trees planted in a National Forest in memory of your loved one.
Funeral services provided by:
Snyder-Rodman Funeral Center & Crematory
MAKE A DONATION
MEMORIES & CONDOLENCES
12 Entries
Aletha, we are so sorry for your loss! We just heard about it! We always admired Jim...he was a peacemaker! With sympathy, Bruce & Deb Weiser
May 4, 2014
May God bless you and your family in this time of sorrow.
April 30, 2014
Thoughts & prayers to the Blaney family. Jim was a great guy.
Toyoko Russo
April 30, 2014
To the entire Blaney family our prayers are with in this time of sorrow.I worked with Jim for many years at GE,we will miss him at our monthly breakfast at TJ's
Joseph Drakulich
April 30, 2014
Dad,
You are the best man we ever knew, always just a phonecall away. You are my best friend. Thanks for everything you did for us and for always being there.
We love you....Yep
Jim & Becky Blaney
April 29, 2014
Aletha and family, we are so saddened and stunned by this sudden loss. Our prayers are with you. Jim was a good neighbor and is a good and faithful servant.
Becky Miller
April 29, 2014
Aletha, I am so sorry for your loss. My thoughts and prayers are with you and your family.
Karen Davis
April 29, 2014
Aletha and family ,I just got into meeting family this past year and it saddens me to see one lost,,You have my deepest condolences and prayers to you
Debbie Votaw
April 29, 2014
Aletha and family, I was sad to hear of the loss of Jim, however I rejoice knowing that he is in Gloryland awaiting our arrival. What a wonderful, peaceful place he must be experiencing! I am sorry for the empty place in your lives that remains. I am so blessed to have known Jim.The dedication to and cornerstone of the church and family speaks loudly of his love for Christ.
Renee Hobler Grooms
April 29, 2014
I worked with you at Delo Screw back in the mid 60s. You were a fun guy to work with. I wish your family well.
Dr. Mike Copper
April 29, 2014
My condolences at this sad time. May you be comforted by drawing close to God. (James 4:8)
April 29, 2014
Melissa Whitesel
April 28, 2014
Showing 1 - 12 of 12 results