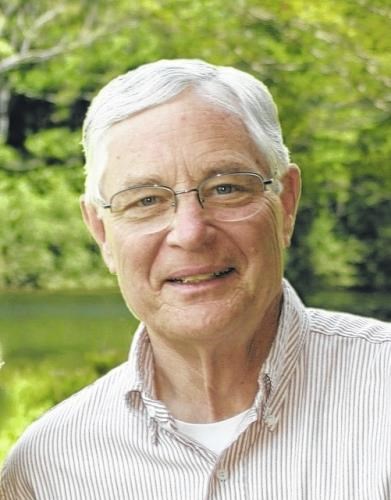 He loved his work as a marketing and consumer research consultant. A revolutionary thinker, he drew on Neuro-Linguistic Programming to create "Cue Framing" his methodology for analyzing buying patterns for his clients, domestic and international.

He loved his kids, kids-in-law, and grandkids and often took them hiking, canoeing, or on a run to the town dump. And he especially loved the love of his life: Coe.

Bill and Coe met during freshman week at Bates College in Maine, where he spotted her on a hike up Thorncrag Mountain that was part of freshman orientation. At the top, the girls were instructed to put their right shoe into a pile, and Bill kept careful eye on Coe's shoe because, as part of the Cinderella Game, each guy was instructed to select a shoe and match it with a girl, whom he would get to know. Lucky for Bill, Coe had her eye on him, and was more than happy to sped time on the mountain top with him.

But before all that, Bill was born May 11, 1936 in Osaka, Japan to Methodist Missionary parents Weyman Huckabee and Susan (Bedell) Huckabee. They and his brother Carl Huckabee are deceased. In his youth, Bill lived in New York where he was active in Boy Scouts. At Rye High School he performed magic, played the guitar and sang.

After graduating from Bates, he earned a Master's Degree in Marketing from Boston University. He worked for the Boy Scouts of America in Los Angeles and at the National Office in New Jersey. He also worked for Opinion Research Corporation in New Jersey and for Associated Merchandising Corporation in NYC. He moved to Ohio to work for Management Horizons, and later the Doody Company, and lastly for Bill Huckabee Consulting focusing on enhancing communication and sales for his clients.

In the early '70s Bill could be seen driving the family's VW bus around Hightstown, N.J. with a passel of kids in the back. In the mid '70s the family moved to Delaware, Ohio where Bill was an early supporter of Help Line, Andrews House, and Grady Hospice. With Coe he supported the Central Ohio Symphony, People in Need, and the Delaware Unitarian Universalist Fellowship. In 2000 Bill and Coe bought property in their beloved Maine and each summer reconnected with many college friends.

Bill struggled with Alzheimer's in his later years, but kept his sweet, gentlemanly nature. In part this was due to the efforts and involvement of the Alzheimer's Association. His last memories to go were those of his cherished family. He was greatly supported in his last years by friends and the ever caring staff at The Arbors of Delaware and the Ohio Health Hospice team.

A memorial service will be held in the Terrace Room at Willowbrook on Sunday, Aug. 21, 2016 at 5 p.m. Bill's ashes will be buried at the Memorial Garden of the Unitarian Universalist Church in Princeton, N.J.

To offer condolences to the family, please visit www.robinsonfuneralhomeinc.com.

Memorial contributions may be made to the Alzheimer's Association, 39 W. Winter St., Delaware, OH 43015.

To plant trees in memory, please visit our Sympathy Store.
Published by The Delaware Gazette from Aug. 18 to Aug. 19, 2016.
MEMORIAL EVENTS
No memorial events are currently scheduled.
To offer your sympathy during this difficult time, you can now have memorial trees planted in a National Forest in memory of your loved one.
Funeral services provided by:
Robinson Funeral Home
MAKE A DONATION
Please consider a donation as requested by the family.
MEMORIES & CONDOLENCES
4 Entries
Dear Mrs. Huckabee, I truly wish you comfort in your sorrow with the loss of Bill. We all loved him at The Rye High School. Sincerely, Norene Kindstrand Rootare, Atlanta, GA
September 12, 2016
Amy-
I hold you and your family deep in my heart. I discovered a wonderful connection with your dad as I read his obituary; I too went to Bates and met my future honey.
Glad that we are connected in song and dance.
Love and Light.
Lauren Kelly-Washington
August 21, 2016
Sending prayers to Mrs. Huckabee, Amy, and Anna and their family's