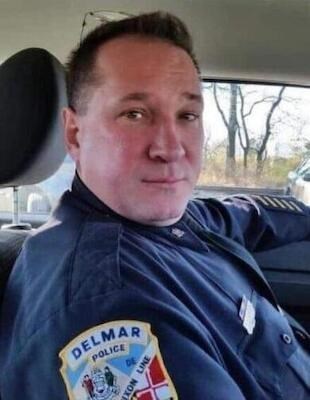 Laurel - Corporal Keith Andrew Heacook, badge number 913-10, answered his final call of duty on Wednesday, April 28, 2021. Born on December 7, 1966 in Pompton Lakes, New Jersey, he was the youngest of seven children. Officer Heacook graduated from Cape Henlopen High School and Sussex Tech with the class of 1986. Following his high school graduation, Keith earned his degree in Criminal Justice from Del-Tech Community College in Georgetown. The first four years of Keith's career in law enforcement began at the Wicomico County Detention Center. On June 28, 1998, he joined the Delmar Police Department and proudly served his community for over 22 years.

He was a beloved husband, son, brother, father, and a friend to everyone he knew. The oath he took to protect and serve became more than just a job to him; it was a lifestyle. The members of the Delmar Police Department were Keith's extended family. There wasn't anything he wouldn't do for the citizens of his community and knew the absolute meaning of living life to the fullest. When not protecting the people of Delmar, he worked as an accomplished carpenter and counter top fabricator. Officer Heacook was happiest when making memories with family and friends. He was the biggest supporter and best friend to his 12 year old son, Matthew and would frequent his baseball games to cheer him on. He was also known for his unwavering commitment to his wife, Susan. The love they shared was evident to everyone they knew. He was also a dedicated son to his mother Anita, who he visited with daily and helped her in so many ways. He will be forever remembered for his contagious smile, happy go lucky attitude and his diligent work ethic.

A full police detail funeral will be held on Monday, May 10, 2021 at 12:00 p.m. at Emmanuel Wesleyan Church, 217 Beaglin Park Drive, Salisbury, MD. The Reverend Christopher LaBarge will officiate. Receiving will be held from 10:00 a.m. to 12:00 p.m. Interment will be private. Arrangements are in the care of Short Funeral Home in Delmar. Online condolences may be sent to the family by visiting www.shortfh.com.

In lieu of flowers, memorial contributions may be made in Keith's memory to support the Delmar Police Crime Prevention Fund, c/o The Delmar Police Department, 102 S. Pennsylvania Avenue, Delmar, MD 21875.

"Blessed are the peacemakers: for they shall be called the children of God." (Matthew 5:9)


To plant trees in memory, please visit our Sympathy Store.
Published by The Daily Times from May 4 to May 5, 2021.
MEMORIAL EVENTS
May
10
Visitation
10:00a.m. - 12:00p.m.
Emmanuel Wesleyan Church
217 Beaglin Park Drive, Salisbury, MD
May
10
Funeral
12:00p.m.
Emmanuel Wesleyan Church
217 Beaglin Park Drive, Salisbury, MD
Funeral services provided by:
Short Funeral Home
MAKE A DONATION
MEMORIES & CONDOLENCES
Sponsored by Short Funeral Home.
4 Entries
Prayers are forever with Mr. Heacook’s family.
I am deeply sorry for your loss. Mr. Heacook’s
Grandfather Joseph Heacook Sr. was my Culinary
Arts teacher at Sussex ( then known as ) Vo-Tech.
One of the nicest and most hardworking teachers
I ever had. This is a tragedy for sure. RIP
Todd Odor
Acquaintance
May 10, 2021
Cpl Heacook brother in blue, friend and neighbor your watch has ended thank you for your service you will be missed by many Rip Godspeed my brother!
John Devlin
Friend
May 7, 2021
You will always be remembered for your Superb Lifestyle of community protection, your care of your LOVED ONES and your Country.
May God Bless your Family.
Rest in Peace Officer Heacook, so well deserved.
Lois Sterling Bull
Acquaintance
May 4, 2021
I did not know Cpl. Keith A. Heacook. I wish I had. Sending Prayers for you and your son. Also to rest of your family and To the Delmar Police Department. Remember your Memories of him!
Gloria Kelly
May 4, 2021
Showing 1 - 4 of 4 results