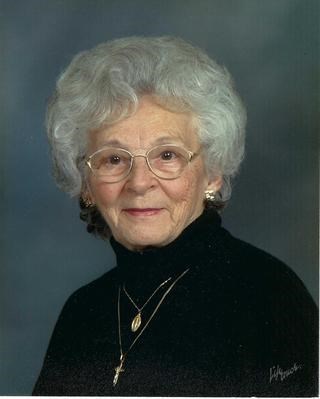 Salisbury - Elizabeth "Betty" A. English, 97, of Salisbury, died Wednesday, July 31, 2019 at Harrison House in Snow Hill. Born July 3, 1922 in East New Market, she was the daughter of the late Joseph Walter Marousek and Catherine Era Marousek.

She was a 1941 graduate of East New Market High School and worked for many years at White and Leonard and also for Benjamins, both in Salisbury. She was a member of St. Francis de Sales Catholic Church, American Legion Post 64 Ladies Auxiliary and VFW Post 194 Ladies Auxiliary. She was also active in several local bowling leagues and loved going to the beach.

She is survived by a son, William T. Kelley IV and wife Ruth of Salisbury.

The family will receive friends on Tuesday, August 6, 2019 from 6:00PM to 8:00PM at the Zeller Funeral Home in East New Market. Mass of Christian Burial will be celebrated on Wednesday, August 7, 2019 at 11:00AM where friends will be received one hour prior to the mass at the church. Rev. Stephen Lonek will be the celebrant. Interment will follow at the church cemetery at a later date.


Published by The Daily Times on Aug. 4, 2019.
To plant trees in memory, please visit our Sympathy Store.
MEMORIAL EVENTS
Aug
6
Visitation
6:00p.m. - 8:00p.m.
Zeller Funeral Home
106 Main Street P.O. Box 207, East New Market, MD
Aug
7
Mass of Christian Burial
11:00a.m.
Our Lady of Good Counsel Catholic Church
Secretary, MD
Funeral services provided by:
Zeller Funeral Home
MAKE A DONATION
MEMORIES & CONDOLENCES
Sponsored by Zeller Funeral Home.
2 Entries
I had the pleasure of taking care of Mrs. English and what a blessing she was. Rest in peace.
August 7, 2019
So sorry for your loss, God Bless and our prayer are with you and your family.Love you both, Ed
August 7, 2019
Showing 1 - 2 of 2 results