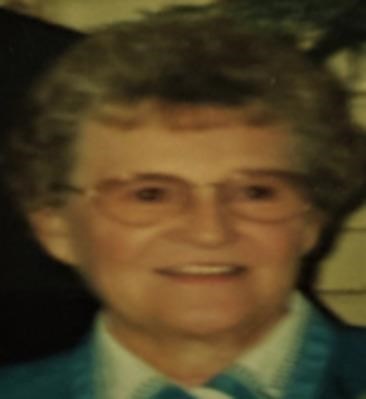 Salisbury - Emily (Ames) Briddell, age 94 of Salisbury, gained her angel's wings on Friday, July 30, 2021. She passed away peacefully at home, surrounded by her loving family, following a courageous battle with cancer. She was born on July 14, 1927 near Dalby's in Northampton, County, VA. She was the daughter of the late Rufus T. Ames and Lillian Stevenson Ames, of Northampton County, VA.

Emily married William B. Briddell, Sr. on October 16, 1948. They were married for an amazing 72 years. Emily was Bill's sweetheart; he always referred to her as his "pretty lady". Their marriage produced 4 children including: Rebecca A. Skinner of Salisbury, MD; Paige B. Hazelton (Bob) of Timonium, MD; Bryan Briddell (Sue) of Saratoga Springs, NY; and Donna Bartrug (Rocky) of Hebron, MD. They also considered Ward Garber, nephew, as a "son" (PA) along with the late Laura Forleo, their AFS exchange student in 1972, as their "daughter".

Emily was a multi-talented woman who was very involved in her community while simultaneously raising her children. Giving back to others was something that she and her husband both believed in and actively practiced. She was a Girl Scout Leader for Troop #98 from 1961-1967. She also engaged in volunteer work with the PTA at North Salisbury Elementary School and, later, with the Opportunity Shop for over 40 years, having served during the early years as co-chairman, marking committee, salesperson, and on the pick-up committee. She was a life member of Plus Volunteers of PRMC, serving over 2500 hours under Carolyn Fitzgerald in the Diabetic Nursing Dept. She believed in the right to vote and actively served with the Board of Elections as Democratic Chief Judge for the Salisbury City elections (1978-1984). She had an amazing curiosity and passion for genealogy and could "hunt down" facts that no one else could find (pre-computer days). Her hidden talent was her ability to read road maps to take her family across the country to CA on a month- long trip, getting lost only one time (pre-GPS days)!

She, and her husband, Bill, were active members of the American Field Service (AFS) serving as liaisons and as a host family for Laura Forleo of Brazil (1972) and Catherine "Charlie" Melin of Sweden (1975).

In 1982, Emily joined Chapter V of PEO Sisterhood serving on various committees, and as corresponding secretary, and treasurer. She was especially proud of her involvement with PEO, and she treasured her PEO friendships.

Emily was a member of the Christ United Methodist Church and the Friendship Sunday School Class on Phillip Morris Drive in Salisbury. She believed in tithing and just a week prior to her passing, wanted to write her last check so that her tithes would be paid. She also donated to many charitable causes.

Emily was an avid reader as well as an incredible gardener. She had a talent for taking most any plant and getting it to bloom in amazing ways. Her children and neighbors were in awe of her gardening talent. She had the most gorgeous flower gardens! Her garden was her place of sanctuary where she found peace and tranquility with God. Her favorite song was "In the Garden" which she often played on her piano.

Emily and Bill owned a cottage at Silver Beach, VA during a span of years where they helped start an outdoor Sunday worship service overlooking the Chesapeake Bay. The services continue to this day.

Emily is survived by her 8 grandchildren: Heather Mayfield (Toby) of Knoxville, TN; Kerrie Coley (Steven), also of Knoxville TN; JonRyan Bartrug (Charlotte) of Baltimore, MD; Logan Bartrug of Arlington, VA; Kelsey Briddell and Taylor Briddell of Saratoga Springs, NY; Bradley Skinner, of Easton MD, and Marcio Forleo (Jacalyn), of Lakewood, CO. She also is survived by 3 great-grandchildren: Aaron and Eli Coley of Knoxville, TN and Luca Forleo of Lakewood, CO. She is survived by numerous long-term friends and neighbors that she considered as part of her family.

A Celebration of Life will be held at Hinman's Funeral Home in Princess Anne, MD on Monday, August 9, 2021. Visitation will be from 9:30-10:00am followed by the celebration starting at 10:00am conducted by Pastor Paul Holland of Christ United Methodist Church. Plans are being made to live-stream the service. Please go to Hinman Funeral Home for further information. Burial will be at Beechwood Cemetery immediately following the service and is open to anyone. A reception will be available immediately following the ceremony at the American Legion Post 94 at the Beechwood Cemetery.

In lieu of flowers, donations can be made in Emily's memory to Chapter V of PEO Sisterhood, the Ruth Langeler Memorial Scholarship Fund, Kathleen Rafa, 6163 Tarry Town Road, Salisbury, MD 21801, or to the Community Foundation of the Eastern Shore at 1324 Belmont Ave, Suite 401, Salisbury, MD 21804.


Published by The Daily Times from Aug. 1 to Aug. 2, 2021.
To plant trees in memory, please visit the Sympathy Store.
MEMORIAL EVENTS
Aug
9
Visitation
9:30a.m. - 10:00a.m.
Hinman Funeral Home
11673 Somerset Ave, Princess Anne, MD
Aug
9
Celebration of Life
10:00a.m.
Hinman Funeral Home
11673 Somerset Ave, Princess Anne, MD
Aug
9
Burial
Beechwood Cemetery
MD
Funeral services provided by:
Hinman Funeral Home
MAKE A DONATION
MEMORIES & CONDOLENCES
Sponsored by Hinman Funeral Home.
2 Entries
To all the family, especially Paige, my heartfelt sympathy. Mrs. Briddell was my Brownie and Girl Scout leader while I was at North Salisbury Elementary School from 1958 to 1961, She was an amazing woman and her good works will live after her. Blessings!!
Jean Tappan Crockett
August 13, 2021
Sorry for your loss, Emily and Bill were such an inspiration, to their class, sharing their home and cottage , for fellowship through the years. Will not be able to share service, living in NC, will be in prayer for family.
Mary Chamberlin
Friend
August 5, 2021
Showing 1 - 2 of 2 results