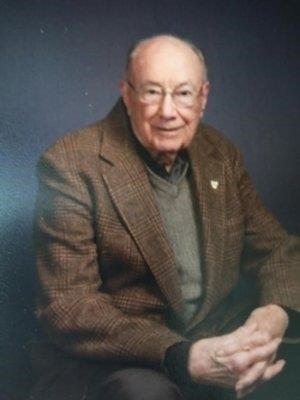 Cambridge-Frank Mace Wright, 94, of Cambridge, MD passed away on September 12, 2016 and will be missed by all those whose lives he touched.

Born on May 14, 1922 in Cambridge, MD he was the son of the late William Oliver Wright and Mary Louise Higgins Wright.

Mr. Wright was a United States Army Veteran having served during WWII, from October 1942 until January 1946, in the 83rd Infantry, E Company, 331st Division. He was captured after landing on Omaha Beach in France and sent to a POW camp, Stalag IIIC, until he was liberated on January 1, 1945.

On November 14, 1945 he married the former Edith Estelle "Kitten" Groff. Frank and Kitten had 41 wonderful years together before she passed away in 1986.

Frank was certainly well known on the Eastern Shore, for he owned Frank Wright's Clothing Store in Cambridge for thirty years specializing in men's apparel.

Frank was a communicant of Christ Episcopal Church, Cambridge, MD.

His hobbies were traveling, camping, hunting, fishing, boating and flying. He held a private pilot's license and flew a Cessna 150. Frank was one of the original participants of the Holly Run, a memorable yearly Christmas time flight bringing fresh holly and pine to Tangier Island.

Of all of Frank's accomplishments most important he was a wonderful and caring husband, father, grandfather, great grandfather and father in law. His family came first.

Surviving are two daughters, Nancy W. McIntee and her husband Mike of Cambridge and Beth W. Reed of Salisbury, five grandchildren, Kelly DeCespedes and her husband Michael from Parkland, Fl., John Stanley and wife Jennifer, Kathy S. Tran and her husband Vu from Philadelphia, PA, Alan McIntee and Philip McIntee both of Cambridge, Md. Also surviving are Marc Stanley of Prosperity, South Carolina, who was married to his daughter Terry, who passed, a niece Jo Anne Spence of Brooksville, Florida. Also other family and a host of friends, including longtime friend Marge Hull. Besides his daughter Terry W. Stanley preceding Frank in death was his grandson Christopher Reed and his brother Oliver Wright.

A funeral service will be held on Thursday, September 15, 2016 beginning at noon at Christ Episcopal Church, 601 High Street. Family will receive friends the hour prior to the service. Officiating at the service will be Pastor Robert White, Rector. Interment will follow in the adjourning churchyard immediately after the service.

Expressions of sympathy may be made by making memorial offerings in Frank's memory to Christ Episcopal Church, 601 Church Street, Cambridge, MD 21613 or American Legion Post 91 601 Radiance Drive, Cambridge, MD. Arrangements are in the care of the Thomas Funeral Home, P.A. in Cambridge.