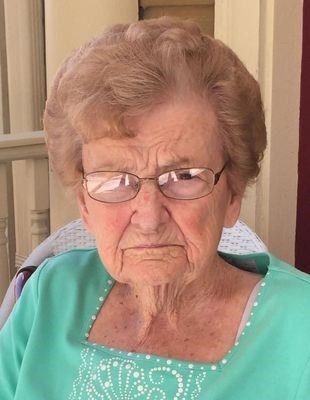 Salisbury - Helen Wallace Bloodsworth, 91, died on Friday, February 16, 2018 at John B. Parsons Home in Salisbury. Born on July 6, 1926 in Dames Quarter, MD she was the daughter of the late Norman Irving and Bessie Pauline Wallace.

Mrs. Bloodsworth was educated in the Somerset County School System and after leaving high school she moved to Seaford, and worked for Dupont for about 7 years. Upon leaving Dupont, she moved to Princess Anne, where she met the love of her life, William "Billy" Vance Bloodsworth. After the two were wed, they had three children, Beverly, Joan and William, Jr.; which became most important in Helen's life. Once their children were in college, Helen joined her siblings working as an aide at the Salisbury Nursing Home. She felt working in the nursing home was one of the most rewarding experiences, but did not compare to the experiences of being a wife, mother, and grandmother. Her granddaughters love sharing stories of their times spent with their "Mom-Mom".

Helen was an avid sports enthusiast and was a diehard Orioles fan. Her enthusiasm created many memorable moments in the neighborhood.

Helen's family would like to thank John B. Parsons Home and Coastal Hospice Palliative team for their incredible care, support and comfort. They would also like to thank special neighbors and friends, Edwin and Jane Ford, for the years of fond memories, love and support.

A funeral service will be held on Tuesday, February 20, 2018 at 11:00 am at Holloway Funeral Home, Salisbury. A visitation will be held one hour prior to the service. Pastor Mike Phillips will officiate. Burial will be in Wicomico Memorial Park in Salisbury.

Published by The Daily Times on Feb. 18, 2018.
To plant trees in memory, please visit the Sympathy Store.
MEMORIAL EVENTS
Feb
20
Visitation
10:00a.m. - 11:00a.m.
Holloway Funeral Home - Salisbury
501 Snow Hill Road, Salisbury, MD
Feb
20
Funeral service
11:00a.m.
Holloway Funeral Home - Salisbury
501 Snow Hill Road, Salisbury, MD
Funeral services provided by:
Holloway Funeral Home - Salisbury
MAKE A DONATION
MEMORIES & CONDOLENCES
Sponsored by Holloway Funeral Home - Salisbury.
6 Entries
When someone you love becomes a memory, they memory becomes a treasure in your heart and it lives forever. May the wonderful treasures fill your hearts with love and bring you peace .Hosea 13:14. My sincerest condolences for your family and friends.
Gresilda Varona
February 20, 2018
My condolences to the family. May the wonderful memories of your loved one comfort you until God's promises are fulfilled. Matthew 5:5
February 19, 2018
After the days and week have passed by, it may be a bit of a challenge trying to return back to life's normal routine but only without Helen, may you continue to feel comforted by the love of God, and continue to lean on family and friends for support.
D S
February 19, 2018
May you all have much peace and comfort from the God of love during this difficult time. Psalms 145:14
Deepest Sympathy
Brewer's
February 19, 2018
May God bless you and your family in this time of sorrow.
February 19, 2018
A sweet lady- she will be missed. Prayers for peace and comfort her family . They were all so good to her. She was blessed.
February 18, 2018
Showing 1 - 6 of 6 results