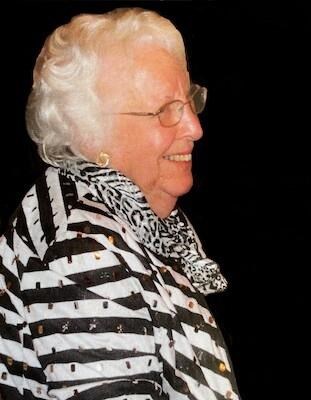 Born on February 22, 1923 in Sugar Grove, WVA, she attended a one room local elementary school and graduated from Franklin High School. Many generations of extended family lived in Sugar Grove; her 9th great grandfather is said to have been the first Lutheran minister in WVA. Her father ran a farm and grain mill, Mitchell Mill, and her mother was educated as a teacher. Her later life was shaped and influenced by her faith and church, her connectedness to local community and the challenges and rewards of farm life supported by family. An excellent student, she was a good shot with a rifle and loved participating in 4-H events, which fostered her love of trees and flowers. She enjoyed playing basketball and was on a bowling League. During WWII she moved to Washington DC where several of her sisters were nurses in the war effort. She obtained a business degree from Strayer Business College and worked for the Selective Service. She loved the energy of city life, new friends - who remained life-long friends, fancy hotel parties, political culture of wartime, and sports, especially the Washington Senators Baseball team. She attended their games regularly. One of her favorite stories was being asked to be General Eisenhower's guide for the day.

She met her husband, Jim, in Washington DC, where he attended Catholic University after serving in the Navy. They were married in 1949 and moved to Accomac, VA on the Eastern Shore where Jim joined an uncle in the automotive/boat business. Although she said she always missed the majesty of the WVA mountains and valleys, the Shore became her home and she fell in love with the beauty of the Chesapeake Bay and the Atlantic Ocean. An avid angler who loved spending the day on the water fishing, sailing, boating or at the beach, she felt herself incredibly fortunate to enjoy the birds, wildlife and gorgeous sunset over the water, right out her back door. In 1976 they embarked on an adventure, literally moving their home in Accomac, designed and built by historian, Ralph Whitelaw, to a waterfront lot on Cedar Creek, Onancock. At age 94, she left her home to be closer to her children, and lived in an assisted living community first in Charlottesville and then in Front Royal, VA.

A past president of the Jr. Woman's Club of Accomack County, she was active in several Garden Clubs, a member of Holy Trinity Episcopal Church and choir and active in the Episcopal Women's group, and the Eastern Shore Historical Society serving as a docent at Kerr Place. Her lifelong interests included bridge, gardening, flower arranging and traveling. She loved to read and encouraged and supported her children and grandchildren to continue their higher education. She worked for the Mental Health Association of the Eastern Shore in its infancy through its incorporation in the Accomack County Health Department.

A private graveside service will be held at the Fairview Lawn Cemetery on Monday, May 24, 2021, with The Reverend Ed Hunt officiating.

Donations may be made in her memory to the Eastern Shore of Virginia Historical Society, P.O. Box 179, Onancock, VA 23417.

Memory tributes may be shared with the family at www.williamsfuneralhomes.com.

Arrangements by the Williams-Onancock Funeral Home.


Published by Eastern Shore News from May 19 to May 22, 2021.
To plant trees in memory, please visit the Sympathy Store.
MEMORIAL EVENTS
To offer your sympathy during this difficult time, you can now have memorial trees planted in a National Forest in memory of your loved one.
Funeral services provided by:
Williams-Onancock Funeral Home
MAKE A DONATION
MEMORIES & CONDOLENCES
Sponsored by Williams-Onancock Funeral Home.
0 Entries
Be the first to post a memory or condolences.