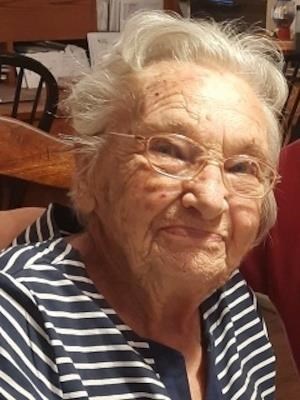 Berlin - Mildred Louise Niblett Nock, age 96, died Wednesday, July 14, 2021 at the home of her daughter in Berlin. Born in Pocomoke, she was the daughter of the late Norman and Bessie (Phillips) Niblett. She was preceded in death by her husband Lloyd Henry Nock, and two brothers Linwood and Burley Niblett. Surviving, are her children Lloyd "Sonny" Nathan Nock (Vicky) of Berlin and Shirley N. Scott (Bennett) of Berlin, There are five grandchildren, David Scott, Sharon Bradford, Kelly Bowden, Brandy Nock, and Nathan Nock, and eleven great-grandchildren, Matthew, Michael, and Luke Scott, and Will and Jenna Bradford, Ethan Nock, Tucker Nock, Emily Bowden, Kayla Bowden Warnick, Conner Farran, and Jack Phillips. Also surviving is her sister Norma Knight of Pocomoke, several nieces and nephews, and special companion, her cat Tinker.

Mrs. Nock had been a devoted wife, beloved mother and homemaker. She had also worked with her husband with the many jobs on their farm. She was a member of Stevenson United Methodist Church, the Methodist Women, and Alter Guild. In later years, she attended the Community Church at Ocean Pines with her daughter.

A funeral service will be held on Monday, July 19th at 11:00 AM at the Burbage Funeral Home in Berlin. Rev. Dale Brown will officiate. Friends may call one hour prior to the service. Interment will be private for the family in Evergreen Cemetery. A donation in her memory may be made to: Coastal Hospice, P.O. Box 1733, Salisbury, MD 21804. Letters of condolence may be sent via: www.burbagefuneralhome.com .


Published by The Daily Times from Jul. 15 to Jul. 17, 2021.
To plant trees in memory, please visit the Sympathy Store.
MEMORIAL EVENTS
Jul
19
Calling hours
10:00a.m. - 11:00a.m.
Burbage Funeral Home - Berlin, MD - Berlin
108 William Street, Berlin, MD
Jul
19
Funeral service
11:00a.m.
Burbage Funeral Home - Berlin, MD - Berlin
108 William Street, Berlin, MD
Funeral services provided by:
Burbage Funeral Home - Berlin, MD - Berlin
MAKE A DONATION
MEMORIES & CONDOLENCES
Sponsored by Burbage Funeral Home - Berlin, MD - Berlin.
6 Entries
SORRY FOR YOUR LOSS. SHE HAD A GREAT LIFE TO HAVE LIVE SO LONG. MY PRAYS ARE WITH YOUR FAMILY
connie L bassett
July 21, 2021
Sending love and prayers to all of you. Jeff and I were saddened to hear of your loss. I sure do miss you guys.
Rachel Comley
Other
July 20, 2021
Our family is sorry for your loss. Your love and care have sustained Mrs. Nock for many years when she was not able to be independent. Our Savior will care for her now. Our love and sympathy are with you now during this time of grief and celebration. Amen.
Jim and Joan Scott
Family
July 19, 2021
All of my heartfelt prayers and sympathy to Mildred's family.She had many great memories with her family.much love from mary alice.
Mary alice
July 16, 2021
We were so sorry to hear of Mildred's passing. Your family is in our thoughts and prayers at this most difficult time. In Deepest Sympathy, Carolyn Thompson & Bonnie Dennis
Carolyn Thompson & Bonnie Dennis
Friend
July 16, 2021
My prayers and love are with the Nock family on the loss of your dearest Mother. She was the kindest person I ever met. Her memory will stay in the heart of everyone who knew her. How blessed you all were to have had her. Love, Gretchen
Gretchen Connor
July 16, 2021
Showing 1 - 6 of 6 results