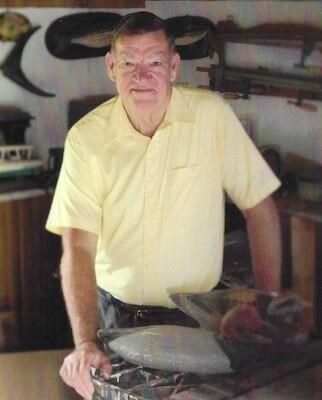 Wenona - Stanley Windsor Bozman, born April 16, 1934, entered heavens gates the evening of July 18, 2021. He was born and raised on a farm in Dames Quarter, Maryland where he spent his days working in the fields to help support his family, playing baseball, hunting, fishing, and crabbing the marshy waters around his home, and always being ornery. He had a knack for making people smile; he was a prankster with a sarcastic sense of humor and infectious laugh. His loss will be felt throughout the island community where he played, taught, coached, and was a spiritual mentor to so many.

He met the love of his life Gertrude Webster in high school and was married in 1959. She was the softness to his rough edges and the depth of their love and devotion was evident to every person they encountered. Stanley had 2 daughters, Faith and Trudi, who were the light of his life. He graduated with a bachelor's degree in education and went on to get his masters from Salisbury State University. He began his teaching career at Deal Island School and eventually became principal until he retired in 1988.

He shared his love of sports with so many over his lifetime. He played baseball, basketball, soccer and golf and found great joy in passing on his passion through coaching countless teams. He was inducted into the Eastern Shore Baseball Hall of Fame in 2012.

He was a builder, and he spent hours tinkering in his shop and working on his home. He loved to travel, spending summers down at Cherrystone and once he retired they took countless cruises, drove across the country, and spent as much time with family and friends as possible. He knew the importance of family, and he showed love to his in every way. He also knew the importance of faith; he shared the love of God with so many in his life and prayed over his loved ones daily. He was an active member of St. Paul's Methodist Church and also belonged to the Gideon's organization. He was an example to so many of what a Godly leader should be.

He was preceded in death by his parents, Charles and Mary Windsor Bozman; brothers and sister-in-law, Charles Bozman, and Walter and Margaret Bozman; and sisters and brothers-in-law, Mary and Earl Webster and Nora and David Webster.

Funeral services officiated by Pastors David, Wally, and Tim Webster will be Friday, July 23, 2021 at 2 PM at St. Paul's Methodist Church in Wenona where a viewing will be one hour prior. Interment will follow St. Paul's Church Cemetery.

Arrangements are in the care of Bradshaw & Sons Funeral Home. To send condolences to the family, please visit our website at www.bradshawandsonsfuneralhome.com.