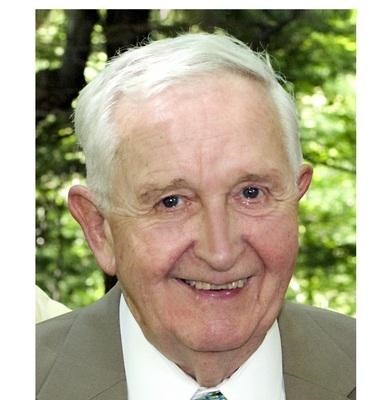 Rochester: Friday, October 24, 2014, peacefully at the age of 86. Hal was a beloved husband, father, and grandfather. Born and raised in Colorado, he served in the Navy during both WWII and the Korean War, following which he became a Mechanical Engineer and pursued a career at Eastman Kodak Company until his retirement in 1986. He was an avid woodworker, huntsman, sailor at the Rochester Yacht Club, trumpet player in the Irondequoit Concert Band, and supporter of the Rochester Philharmonic Orchestra. After retirement, he and his wife Polly traveled extensively around the world until her passing in 2007.

Friends are invited to meet the family on Saturday November 29, 2014, two days after Thanksgiving, at 2:00 pm at Brighton Presbyterian Church for a memorial service and time of personal sharing. Interment will be held in private with no prior visitation. In lieu of flowers, memorial donations may be directed to the Irondequoit Concert Band or the Rochester Philharmonic Orchestra. For more information, to share a memory, or to send the family a condolence, please visit www.harrisfuneralhome.com

Published by Rochester Democrat And Chronicle on Oct. 26, 2014.
To plant trees in memory, please visit the Sympathy Store.
MEMORIAL EVENTS
To offer your sympathy during this difficult time, you can now have memorial trees planted in a National Forest in memory of your loved one.
Funeral services provided by:
Paul W. Harris Funeral Home - Rochester
MAKE A DONATION
MEMORIES & CONDOLENCES
1 Entry
To the Lowry Family:
My deepest sympathy in the passing of your Dad! He was a unique person in every way. I enjoyed our conversatins while , I was cutting his hair @ Cloverwood Senior Living.. I will miss him. May he enjoy eternity , with his band in heaven.
With regards:
Curley
October 26, 2014
Showing 1 - 1 of 1 results