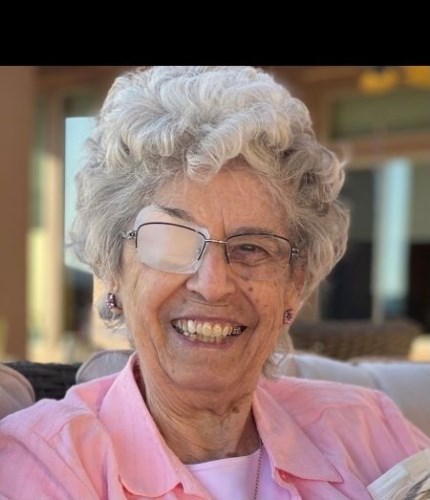 Bessie Lee Bonfield (maiden name: Spencer) was born on November 17, 1933 in West Virginia. She married James R. Bonfield and became an army wife, spending time stationed in Alaska, California, Germany and Kansas until James retired from the military and they moved to Albany, Oregon in 1966.

While James worked at Oregon Freeze Dry Foods, Bessie dedicated her life to raising their two daughters, Shawn and Teresa. Bessie volunteered at their schools and was President of the PTA. She also volunteered on Red Cross blood drives beginning in 1971 and in 1978, she became the Linn County Blood Chairperson. She loved volunteering for the Red Cross and she and James worked hard for the Red Cross for many years, making countless friends along the way.

Bessie also volunteered for Fish Emergency Services, delivering groceries to people in need. On the weekends, she monitored the phones for Service to Military Families for Linn and Benton Counties. For six years she also volunteered as a Pink Lady at Albany General Hospital.

James sadly passed in July of 2005. She loved him very much and cared for him faithfully along with help from her daughter Shawn until his passing. Bessie continued spending time with the friends they had made over the years. That friend group grew including Jan, Edina and her neighbor Jan and her daughter Tammy and they all became such an important part of her life. She was blessed with this group of close friends. She also enjoyed spending time with Shawn on the weekends and having her nearby to help her with her home.

Bessie lost most of her vision after a bout with Shingles and could no longer drive or have the ability to read. In May of 2019, she moved to Anthem, Arizona in May 2019 to be near her daughter Teresa so Teresa and her husband, Mike, could care for her.

Bessie sadly was stricken with Non-Hodgkin's Lymphoma and Dementia and went to heaven to be with James on May 1, 2021. She will be missed very much. She is survived by her daughters Shawn Motter and Teresa Rowe, her granddaughters Jennifer Murphy (Shawn's daughter) and Nicole Rowe (Teresa's daughter), and her great-grandchildren Nathanil, Kelly, Jr. and Leon (Jennifer's sons). She is also survived by William Durst and Alma Durst (her brother and sister) and their families in Ohio.

In lieu of flowers, please donate a memorial gift to the American Red Cross. You can make a donation in Bessie's memory by calling 503-528-5634. The Red Cross will send a personalized tribute card to the family notifying them of your thoughtfulness.

To plant trees in memory, please visit our Sympathy Store.
Published by Albany Democrat-Herald on May 7, 2021.
MEMORIAL EVENTS
No memorial events are currently scheduled.
To offer your sympathy during this difficult time, you can now have memorial trees planted in a National Forest in memory of your loved one.
MAKE A DONATION
MEMORIES & CONDOLENCES
1 Entry
Bess was a sweet lady who presence will be missed dearly.
Joni L Young
May 7, 2021
Showing 1 - 1 of 1 results