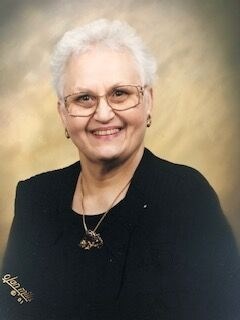 Consuelo "Connie" Jean Armfield, 88, of Los Osos, California and Albany, was born on February 26, 1932, in Pasco, Washington and passed away on August 22, 2020, at home in Los Osos surrounded by her loving family and beloved dog Cairo.

Connie was born in Pasco, Washington, the daughter of Walter Ames Keyes and Marvel Van Houchin-Keyes. Shortly after graduating from high school in Pasco, she married Robert Weldon Armfield, and they moved to eastern Montana to start their new life together working on an uncle's cattle ranch. Later, they moved to Billings Montana, where two of their three children were born (Scott and Patti). At the same time, Connie started working for a local phone company, which later became AT&T. Both Connie and her family were extremely proud of her achievements as a career woman in a predominantly male field. Noting that she fought hard for the rights of working women on a wide range of issues from clothing restrictions to equal pay. Eventually, the family settled into a suburb just outside Portland, but not before brief moves to Idaho Falls, Idaho, where their last son was born (Brett) and Burley Idaho. After working for AT&T for several years, Connie retired in 1988.

She was proceeded in death by her parents, Walter and Marvel and her sister Gloria Donahue. At Connie's request, she was cremated, and her family is having a private celebration of life on what would have been her 89th birthday, February 26, 2021.

To plant trees in memory, please visit our Sympathy Store.
Published by Albany Democrat-Herald on Feb. 26, 2021.
MEMORIAL EVENTS
No memorial events are currently scheduled.
To offer your sympathy during this difficult time, you can now have memorial trees planted in a National Forest in memory of your loved one.
GUEST BOOK
0 Entries
Be the first to post a memory or condolences.