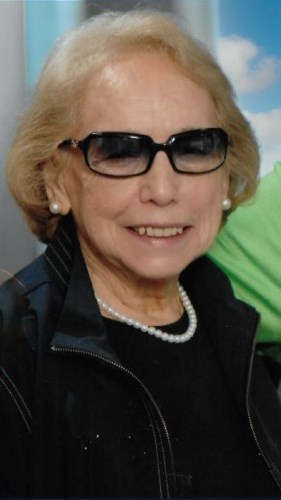 Although Dolores Mouradian was louder than life, she died quietly just days before her 88th birthday.

Born in New York City to Spanish immigrants Jose Martinez and Teodora Rodriguez, Dolores and her bother Joe were raised on Orchard Street in Manhattan's Lower East Side, just steps from what is today the National Tenement Museum.

Dolores claimed she spoke Spanish with a "Jewish accent" and willingly shared vignettes of life during the Great Depression: wet clothes strung across upper balconies of shotgun apartment buildings; mothers and grandmothers kibitzing on stoops as they watched children play in the street; foods as colorful as the languages woven through their neighborhoods; movies, streetcars, bath houses and delicatessens.

After high school Dolores worked clerical jobs and eventually enjoyed a successful career focused on finance and human resources. While in California she raised her daughters Joan and Patricia.

Her brother Joe, his wife Bernice, and their family enthusiastically moved to Oregon in the mid-1970s. Buoyed by a job offer from Brand-S Corporation (Corvallis), she relocated with teen Patricia and settled in downtown historic Albany. Daughter Joan followed shortly with her family.

Dolores flourished in Albany. She was a fabulous cook, enjoyed entertaining and made friends easily. She asserted that her best dinner parties always included an 80-year-old widow as well as an eight-year-old boy. She was opinionated, probusiness and followed the news both national and local.

Dolores met Charles Mouradian at a summer church event. After a whirlwind romance they married in the fall of 1980. She was as shocked as anyone that she was marrying again but she said Charlie was "someone pretty special and I'd be an idiot to pass him up".

The Mouradians plunged into their lifelong partnership with humor and patience. While her nest was empty when they married, Charlie was still raising children George and Tammy. Soon the couple incorporated Dolores' grandchildren Jason and Tina into their household; George and Jason were already friends in the same classroom ("My dad married his grandmother last weekend," George casually told their astonished elementary school teacher). Somehow -- and with plenty of prayer -- it worked.

Family was central to Dolores despite working full time. The Mouradians bought a larger historic home downtown and the family remembers Christmas as a riot of presents and food and loud debates on all topics. Birthdays and weddings and baby showers were celebrations that didn't need party games. Brother Joe and Dolores would invite their mother to Oregon for weeks each summer and Charlie included his mother as well.

Post retirement Dolores continued her involvement with St. Alban's Episcopal Church as treasurer, vestry member and devoted altar committee member. She was a volunteer for over two decades for the Samaritan Regional Cancer Center and Samaritan Evergreen Hospice. She was a caring friend who provided comfort to those in crisis or in mourning. She was a compulsive knitter but also read voraciously and had an impressive library of political thrillers and spy novels. She and Charlie enjoyed cruising with friends and family and spent time in Hawaii year after year. They visited Spain including the area where her parents originated, and stayed in touch with that extended family.

A genuine way to honor Dolores would be to pick up the phone right now and call someone who could use your encouragement. In lieu of flowers, the family suggests donations to Samaritan Evergreen Hospice (Albany) or the Samaritan Cancer Center (Corvallis). Arrangements are being handled by Fisher Funeral Home. www.fisherfuneralhome.com

To plant trees in memory, please visit our Sympathy Store.
Published by Albany Democrat-Herald on Mar. 2, 2021.
MEMORIAL EVENTS
No memorial events are currently scheduled.
To offer your sympathy during this difficult time, you can now have memorial trees planted in a National Forest in memory of your loved one.
Funeral services provided by:
Fisher Funeral Home Inc
GUEST BOOK
Sponsored by Fisher Funeral Home Inc.
0 Entries
Be the first to post a memory or condolences.