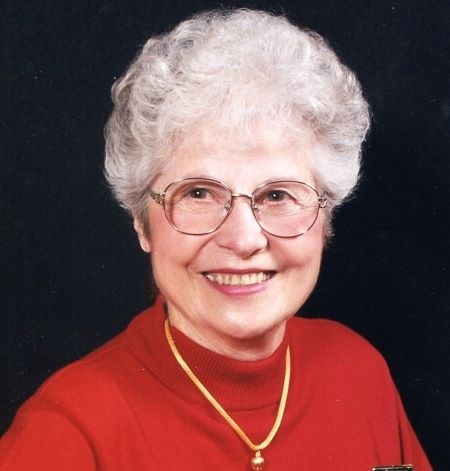 Mickey was born in Corvallis, Oregon to Esther and Robert L. Ball.

She was the great-great-granddaughter of pioneer Willamette Valley rancher Greenberry Smith, who left Virginia and came to Oregon by wagon train in 1885.

She and her beloved husband of 62 years, Keith W. Peterson, resided on the E-4 Ranch, the site of the original donation land claim settlement of Greenberry Smith. They were married February 15, 1947 and built a home where they raised two daughters, Heather Jager and Holly Peterson.

Mickey graduated from Corvallis High School in 1945 and attended Oregon State College majoring in business and animal husbandry. She enjoyed raising livestock and riding horses. In the 1940's the E-4 Ranch Fall Roundup included her herding and branding skills. She also recalled herding cattle for friends at the original Black Butte ranch in central Oregon. She taught her daughters to hunt, fish and shoot. Together with Keith she raised ring-neck pheasants and released them on the ranch to improve declining numbers. To support native habitat returning to the ranch, she leased acreage to the Oregon Nature Conservancy.

Mickey was the comptroller for the studio and ranch. She enjoyed studying a variety of investments, belonged to an investment club and advised the family on interest rates and returns.

She grew up playing golf with her father at Corvallis Country Club. She and Keith were members for over 70 years. At age 71 she had a hole-in-one playing in an event with the Oregon Senior Women's Golf Association at Eugene Country Club.

She took up tennis in her forties and enjoyed playing with family and friends at Tennis West and in Rancho Mirage, California where Keith and Mickey spent the winter months. Other interests included bicycling, playing social bridge and spending time with their grandsons Colby and Casey Jager.

Throughout their activities, they planned many family road trips and vacations to Iowa, California, and across the U.S.

During the eighties Mickey audited journalism classes from OSU and as a vocation wrote feature articles for the Oregon Journal newspaper and a variety of publications. Later in life she attended the OSU Academy for Lifelong Learning.

Mickey was a 50-year member of Chapter BP PEO. She was a lifelong member of First Presbyterian Church.

Mickey was preceded in death by her parents, and by Keith in 2010.

She is survived by two daughters, Heather (Duane) Jager, Holly Peterson, grandsons Casey Jager, Colby (Katie) Jager and their daughter Lucy Jager (great-granddaughter), a sister-in-law in Ames Iowa, Patricia Thompson, and numerous nieces and nephews. She was buried March 13th at Oak Lawn Cemetery in a private service. A memorial service will be held later this summer/fall.

To plant trees in memory, please visit our Sympathy Store.
Published by Albany Democrat-Herald on Apr. 29, 2021.
MEMORIAL EVENTS
No memorial events are currently scheduled.
To offer your sympathy during this difficult time, you can now have memorial trees planted in a National Forest in memory of your loved one.
MAKE A DONATION
MEMORIES & CONDOLENCES
3 Entries
Dear Heather, Holly, and family, I was just made aware of Mickey's death a few days ago. I just read the beautiful obituary. Thanks to marrying Dale, I had the pleasure of knowing your parents and spending time with them over the years. It was always a blessing that added richness to my life. Know that I share your grief at the hole that is left with Mickey's death. I pray that all of the memories you have will be a comfort to you. I will be praying for you all. In Jesus' love, Jeana Moe
Jeana Moe
May 4, 2021
Heather & Holly just want you to know how much we loved both your parents & what a delight it was to work next door to them for 15 years. I can still hear their great laughs & remember the tricks Roger & your Dad had fun pulling on each other. We called your Dad The Muffin Man for months after we got a microwave for the lunch room & he heated a muffin for 10 minutes instead of 10 seconds. Loved your Moms Kentucky Derby & Christmas parties & just being able to enjoy their friendship every day at work. Know you are missing both of them but also know they are back together again. Thank you for letting us be a part of your family
Roger & Deon Cole
April 30, 2021
Mrs. Jager, my deepest condolences to you and your family. May peace be with you. ~Sandi
Sandi (Oakes) Hunt
April 29, 2021