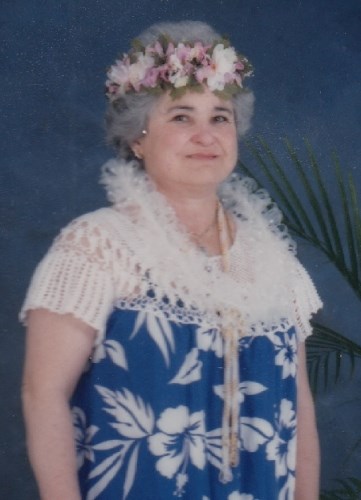 Lola, a proud Spaniard and Hawaii native, was born to Spaniard migrants, Luis Rodrigues and Felicia Abril Carmona Rodrigues. She was born in Wailua, Maui and was the proud sister and nurturer to her 17 siblings, whom all preceded her in death.

Lola was born and raised in Wailua, Maui and was the 12th in birth order with 17 brothers and sisters. Her parents, Felicia and Luis Rodrigues were migrant workers who instilled in Lola the utmost work ethic and importance of working hard in order to provide for your family. She lived on the plantation in Happy Valley, Maui. Lola would often share stories with her children and grandchildren of walking miles to school each day to Punahou Elementary school in Maui alongside her brothers and sisters. She often recalled working in the sugarcane fields, picking coffee and gandule beans, and living off the land they owned. She often worked on the plantation in Happy Valley starting at a young age to meet her family's contribution requirements. Although Lola was forced to quit school after 8th grade in order to help with family needs, her work ethic, tenacity, ability to turn a penny into a dollar, paired with self-sufficiency was uncanning. Lola adhered to the "melting pot" of Hawaiian culture, spirituality, language, and music.

As a young woman, Lola relocated to Aiea Heights, Oahu, Hawaii with her father, Luis

Rodrigues, and some of her siblings. On December 7, 1941 Lola was on her way to church like any other Sunday which overlooked Pearl Harbor. This Sunday Lola would experience the bombing and surprise attack of Pearl Harbor. Her soon to be husband, David Pacheco Torres received an award for his willingness to help from President Roosevelt. Lola would often reminisce with friends and grandchildren of that horrific day in history as she showed the original newspaper clippings from that Sunday.

Lola married David Pacheco Torres in June of 1944 in Aiea Heights, Oahu. Together they had four children, David Pacheco Jr in May of 1945, Judith Leona in March of 1946, Cynthia Ann in January 1948, and Nancy Sylvia in May of 1950. In 1956, Lola and David Sr relocated with their four children from the Hawaiian Islands to the mainland in order to provide a richer and fulfilling life for their family. David was transferred from Pearl Harbor to Hunter's Point, San Francisco, California for employment. Lola, David Sr, and their children resided in Sunnyvale, California following the move from Hawaii. Lola was very close with her sister, Mabel Smith, whom they moved next door to. About six months later, Lola and her family moved to a home on Cabrillo Avenue in Santa Clara, California. After residing in Santa Clara, Lola and her family would move back to Sunnyvale California in 1964. Lola, along with her sisters and brothers who also relocated to the Sunnyvale area remained very close. Lola and her siblings understood the importance of family sticking together and helping each other no matter what. Lola worked the graveyard shift in the cannery at Libby's in Sunnyvale California. She worked the graveyard shift in order to be home with her four children. In addition to this, she was an exceptional housekeeper and even cleaned for the family members of Dwight Eisenhower's family in Los Altos, California. Having a private cleaning business allowed Lola to be with her children, even while working all four children would be in tow with plenty of food and snacks. From the time her children were very young, she taught them all valuable skill sets like gardening, cleaning, cooking family recipes, and hula dancing.

In June of 1985, David Pacheco Torres Sr. passed away in his home in Corvallis,

Oregon. Despite his passing, Lola and David remained connected for a lifetime through their children, memories, and experiences.

In July of 1990, Lola would relocate from California to Corvallis, Oregon. She purchased a home near Walnut Park in order to be close to her daughter, Nancy Davis and family. In 1997, Lola would meet the second love of her life, Henry "Hank" J. Lingg, while dining regularly with friends from the Corvallis senior center at North's Chuck Wagon. He was her angel and quickly became a surrogate grandfather to Lola's grandchildren. They traveled the states together, went back to Hawaii, and cultivated joyous memories.

Unfortunately, Hank passed away in January of 2001 due to a brain aneurysm surrounded by his grandchildren and bride. Lola remained strong and stayed by Hank until he went to be with Savior.

Although she left the islands to come to the Mainland in her 20's, you could never take the culture, food, hula, music, or island out of her. Her ability to tell captivating stories, in

English or Spanish, of the islands and family was unlike any other. She was witty, sarcastic, compassionate, had a no nonsense attitude, and love for her family and grandchildren. Although her life was full, this is a devastating loss. Until she was 92 years old, she drove herself to "work" at Spirit Mountain Casino to win big, in which she always did. It was also a treat when she would bring her grandchildren or children along to hit the slots, but they were never as lucky as her. She had a fantastic green thumb and love for gardening vegetables, fruits, and her prized roses. Her gardens flourished all year long due to her personal compost concoction of coffee grinds. She was the ultimate cook and would make staple items like: plumpleni's, arroz con gandules, potato salad with shrimp, ham and bean soup, pastele's, fried rice, pork and beans with rice, and spam with rice.

She was an artist and could paint beautiful sceneries and crocheted items as small as doily's to as large as afghan blankets. Her favorite past times included: sitting crisscross in her chair while watching cowboy and Indian shows, reading the newspaper, singing Hawaiian songs, playing the slots, swimming, and having all her grandchildren and great grandchildren in her home. Her home was always a safe haven for all to come and stay.

At the spry age of 96, Lola would argue with a smirk that she never aged with each birthday, but that she was eternally sixteen years young. A true Hawaiian native and devout catholic, she was the greatest of her generation and the true queen of the family. It was a rarity to see her without a hat that was accessorized by a vibrant pink or red lei. In addition to her lei's, she often wore her colorful muumuu's, a Hawaiian staple. She always wore her pink or red lipstick for outings because she knew one day someone would have to do it for her.

Lola is preceded in death by her parents, Luis and Felicia Rodrigues, all 17 of her siblings, husband's David P. Torres Sr and "Hank" Lingg, daughter, Cynthia Stein, and great grandson Cannon Pankau.

Felicia Torres, Anita Torres, Matthew Torres, and Jennifer Torres-Houser. She is survived by her daughter, Judith L. Phipps and her two children, Joe Tavares and

Jeremy Tavares. She is also survived by her daughter, Nancy Torres-Davis and her children: Hillary B. Jones, Whitney B. Jagich, McKinley B. Davis, Trent A. Davis, and

Quincey B. Davis. She is survived by Cynthia Stein's sons, Paul Stein and Theodore Stein. She is survived by 14 great grandchildren: Joey Tavares, Kailani Tavares, Amelia Tavares, Cashton Pankau, Sophia Torres, Eliot Jagich, Scout Jagich, Hunter Jagich, Quinn Jagich, Trayden Davis, Ivori Jones, Kennedi Alexander, Thea Houser, Bridger Houser. These names are just a few of the eight to nine generations that are still living in Hawaii as well as on the Mainland. Lola, or Nana to us all, lived a full and fearless 96 years. It was an honor to have her as our Queen and mother figure. She exemplified the importance of hard work and saving your money, living within your means, loving those around you despite differences, and laughter. She is free now with her Savior and loved ones who went before her. We know that she will continue to walk with us as we continue to navigate through life. Her spirit lives on forever. A hui hou kakou Nana, aloha makou ia 'oe.

To plant trees in memory, please visit our Sympathy Store.
Published by Albany Democrat-Herald on Nov. 24, 2020.
MEMORIAL EVENTS
No memorial events are currently scheduled.
To offer your sympathy during this difficult time, you can now have memorial trees planted in a National Forest in memory of your loved one.
GUEST BOOK
0 Entries
Be the first to post a memory or condolences.