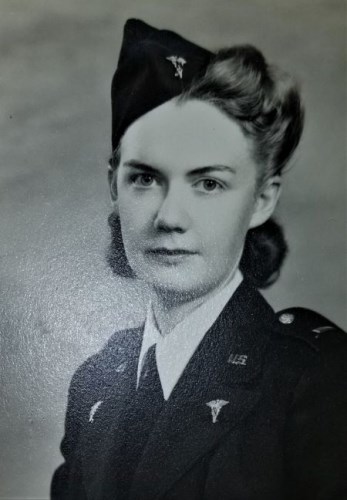 Jeanne Menoret Graham, a proud life-long Oregonian and resident of Corvallis since 1946, died on November 20, 2021 at the age of 103. Born in Portland, in 1918, she survived both the Spanish Flu and the COVID pandemics. Jeanne rode in Model-T cars, made us get up very early to watch the Apollo Moon launch, and marveled at modern computer technology.

She drove, albeit less and less, until she was 101. She loved to garden and fish, was an avid Oregon State sports fan, and played tennis into her seventies.

She met her beloved husband, Robert Douglas Graham, at Fort Riley, Kansas where she served as a nurse and Robert was a pilot in the Army Air Corps during World War II. Bob died in 2004 and now they will rest side-by-side at Willamette National Cemetery.

Pat and Suzanne thank Jeanne's many friends, caregivers, and others who made it possible for our mother to remain in her beloved home. A private memorial service is planned. Please leave condolence messages for the family at www.mchenryfuneralhome.com

Published by Albany Democrat-Herald from Nov. 27 to Nov. 30, 2021.
To plant trees in memory, please visit the Sympathy Store.
MEMORIAL EVENTS
To offer your sympathy during this difficult time, you can now have memorial trees planted in a National Forest in memory of your loved one.
Funeral services provided by:
McHenry Funeral Home & Cremation Services - Corvallis
MAKE A DONATION
MEMORIES & CONDOLENCES
Sponsored by McHenry Funeral Home & Cremation Services - Corvallis.
0 Entries
Be the first to post a memory or condolences.