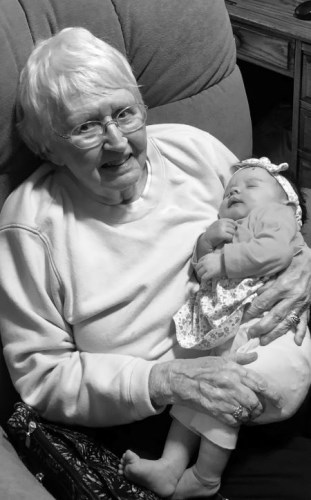 JoAnne Jones Phillips was released from her body's physical pain on February 7, 2020. She was surrounded by loving family members that she cherished in life.

JoAnne was born to Lawrence and Harriet (Hunt) Jones in Omaha, Nebraska, on May 27, 1932. She moved as a young child with her family to Fort Thomas, Kentucky. After vacationing in Oregon, they returned in 1948, settling in Corvallis. She often said she felt at home here from the very start.

JoAnne began her junior year at Corvallis High School and made friends with a girl who had a twin brother. Dating through their 1950 CHS graduation, Lavern Cary became JoAnne's first husband in 1952. She was a homemaker several years through the births and young years of her five children. She later worked as a secretary, but spent most of her career as a library assistant at Harding Elementary School.

It was through her school district connections that JoAnne was introduced to an elementary teacher, Dale Phillips. She surprised everyone by learning to ride his Gold Wing motorcycle with him! They were married 30 years. Dale was a wonderful caregiver through JoAnne's declining health.

JoAnne enjoyed Beaver sports, taking trips to visit family, Bunco with good friends, going to the coast and reading. Nothing, however, surpassed her love of family. Even after her first marriage ended, she remained an integral part of the extended Cary Family events. She loved spending time with her dear sister, Virginia, and the tradition of Easter with the Thompson family. Dale's daughters and grandchildren became like her own, with frequent visits to Nevada. All her grand and great-grandchildren were the delights of her life. She was thrilled to meet and hold her newest great-granddaughter just two weeks before her death.

A Celebration of Life will take place Sunday, September 12, 1 p.m., preceded by a light buffet beginning at noon, at The Officers Club in Adair, 6097 NE Ebony Lane, Corvallis.

Please leave condolences for the family at

Published by Albany Democrat-Herald on Aug. 24, 2021.
To plant trees in memory, please visit the Sympathy Store.
MEMORIAL EVENTS
Sep
12
Celebration of Life
1:00p.m.
The Officers Club in Adair
6097 NE Ebony Lane, Corvallis, OR
Funeral services provided by:
McHenry Funeral Home & Cremation Services - Corvallis
MAKE A DONATION
MEMORIES & CONDOLENCES
Sponsored by McHenry Funeral Home & Cremation Services - Corvallis.
1 Entry
I loved working with JoAnne at the Harding library. We had many laughs together as well as some good times outside of work. She was always so wonderful with the children as they came to the library. Rest in peace and without pain, Jo.
Margo Garton
Work
August 27, 2021
Showing 1 - 1 of 1 results