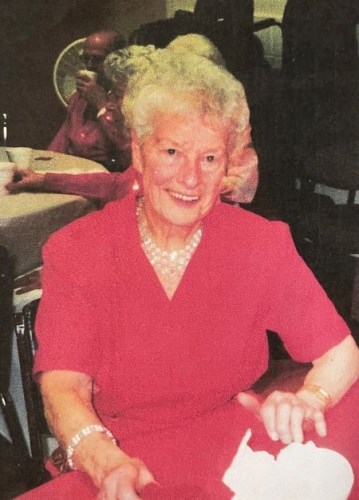 June "Junie" Pearl Bennett passed away November 9, 2021 about a month short of her 96th birthday. Junie was a true Oregonian! She was born in Portland, to Alexander Anton and Ruth M. (Warman) Dambley. She and her twin brother, Junior Earl, were the youngest of eight children and were raised in Portland. Their father left home when the "twins" were just four years old. The older sisters worked for "well-to-do" families to earn money for the family when they were 16 and 17 years old. The older brothers joined the Armed Services when they were also 16 and 17. Junie did not see her siblings, other than her twin brother, for 20 years. Junie was the only sibling to graduate from high school.

Junie met the "love of her life," Vernon Theodore "Ted" Bennett, while she was waiting tables at the military base in Portland. Ted was just completing his service in the U.S. Air Force after having served in World War II. Ted asked Junie out on a date and was heard to say that he would "bet his monthly wages of $50 that she would go out with him!" And she did. They were married in Vancouver, Washington by a Justice of the Peace on June 21, 1945. They honeymooned in Astoria, while on Ted's three-day military pass. They lived in Portland while Ted, who was working as an airplane mechanic, was stationed there yet he longed to return to his hometown of Philomath. Junie had never been out of Portland yet agreed to move to Philomath to be a part of the "13 siblings" Bennett family. Ted worked for 3G Lumber Company driving lumber trucks for 33 years until he retired. Junie worked as a grocery checker at IGA, and then later at Safeway for 19 years. She loved her customers and they loved her. They were socially active in the Elks Lodge of Corvallis No. 1413 (where Ted was an Exalted Ruler) as well as the Corvallis Moose Lodge No. 1411. They enjoyed dancing, listening to music and spending time with their large extended family and friends. Junie and Ted enjoyed 53 wonderful years of marriage before Ted's unexpected death at the age of 73 in a car accident in 1997.

Losing the "love of her life" was very difficult for Junie. She ultimately moved to Meadow Park Estates where she bought a home which she came to love. It was her goal to make her homes and yards look pretty and went to great lengths to make it so. She met so many wonderful new friends and maintained the friendships of others from years past. She enjoyed a very busy social calendar which included playing a variety of card and dice games and enjoying the company of friends but her activities diminished with the onset of Covid-19. Junie was the consummate "social butterfly" who always had a smile for others, was happy, always thinking of others and had a gift of focusing a conversation on others, rather than herself.

In 2004, Junie met Norman "Norm" Ray Kerns and they enjoyed their friendship for 14 years. They would regularly exercise at 6:30 a.m. together at WOW Fitness and later at Timberhill Athletic Club as they recognized the importance of exercising regularly. Norm and Junie began traveling to Yuma, Arizona, for the winter, in 2005. Norm had a travel trailer where they stayed and there was a group of family and friends who gathered each year with them. They loved to dance, go to concerts, spend time with friends and attend various other social activities, until their mobility declined. Norm passed away earlier this year at the age of 90.

After an illness that hospitalized Junie in April, 2021, she realized she needed full-time care and decided to move to Stoneybrook Assisted Living in Corvallis. She enjoyed the exercise classes, piano performances, playing Bingo and other activities. She also enjoyed the many visits from her friends and family who would take her out to lunch or take her for a drive. Moving away from her home and friends of 28 years at Meadow Park Estates was challenging for her. She had just begun developing friendships at Stoneybrook, evidenced by the lovely comments about June after she passed. Junie never lost her smile nor her desire to make others feel better and maybe even make them smile.

June is preceded in death by her husband, Ted, her long-time friend/partner, Norm, all of her siblings, Margaret, Marian, Mildred, James, Helen, Eugene and her twin brother, Junior Earl, who passed away earlier this year. She is survived by a multitude of nieces and nephews on both sides of the family as well as many friends whose lives she has so blessed and touched.

A Celebration of Junie's Life will be held Saturday, December 4. Memorial contributions may be made to Lumina Hospice, in care of McHenry Funeral Home in Corvallis. On-line condolences may be posted at mchenryfuneralhome.com. Junie's family and friends wish to deeply thank all of the angels at Lumina Hospice of Benton County for their love and care of her during the past seven months.

Published by Albany Democrat-Herald on Dec. 2, 2021.
To plant trees in memory, please visit the Sympathy Store.
MEMORIAL EVENTS
To offer your sympathy during this difficult time, you can now have memorial trees planted in a National Forest in memory of your loved one.
Funeral services provided by:
McHenry Funeral Home & Cremation Services - Corvallis
MAKE A DONATION
MEMORIES & CONDOLENCES
Sponsored by McHenry Funeral Home & Cremation Services - Corvallis.
4 Entries
May God's promise found in John 6:40, of the hope to see our loved ones again, comfort your heart and give you peace, strength, and hope in the days ahead.
J.
December 10, 2021
June made her mark in this life for sure! What an amazing and fun person she was. Rest in paradise June, I love you bunches
Jana Lynn Williams
Friend
December 3, 2021
In celebration of the many years of friendship between Gordon & Thelma and Ted & June and many more of their friends...back in the day!
Geary Larson Cuniff
December 2, 2021
Floyd and Joanne loved June and Ted and thought highly of them. Joanne always admired June´s style and kindness. Our prayers are with June´s family.
Julie Vosberg
December 2, 2021
Showing 1 - 4 of 4 results