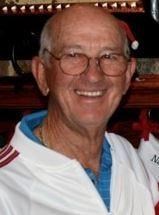 David Richard "Dick" Dameron (84) passed away peacefully on June 30, 2019 at The Village Assisted Living Center, in Denton TX. Dick was known affectionately as "Coach" to many athletes, students, golfers and friends across his long and successful career. He was passionate and energetic in his work with young people, touching thousands of lives across 30+ years and three continents, helping student athletes learn to achieve individually and as teammates on his many championship level teams. Dick started his coaching career in Hot Springs, Arkansas, had frequent ventures in the business world and served US service members and families for 11 years, coaching football and basketball teams internationally in DODD High Schools in Europe and Japan. He found and challenged many golf courses along his journeys around the world.

Dick Dameron was born Sept 26, 1934 in Springfield, MO. Parents Jim and Dorothy Dameron saw him excel in all sports through his high school career. He was a passionate patriot, and joined the US Navy after high school, serving on the USS George Clymer during the Korean Conflict. After leaving the Navy Dick attended Arkansas Tech University in Russellville, AR on a basketball scholarship. There he met and fell in love with the Homecoming Queen, Gail Moore. They married June 17, 1956 and were still in love to his dying day. Dick's favorite scripture was Matt 7:7.

A memorial service will be held at DeBerry Funeral Home Denton, Texas at 11 A.M. on Monday July 8, 2019. In lieu of flowers the family requests memorial donations be made to the Gary Sinise Foundation - Honoring America's Veterans at www.garysinisefoundation.org/veterans/donate

Published by Denton Record-Chronicle on Jul. 7, 2019.
To plant trees in memory, please visit our Sympathy Store.
MEMORIAL EVENTS
Jul
8
Memorial service
11:00a.m.
Bill DeBerry Funeral Directors - Denton
2025 West University, Denton, TX
Funeral services provided by:
Bill DeBerry Funeral Directors - Denton
MAKE A DONATION
MEMORIES & CONDOLENCES
Sponsored by Bill DeBerry Funeral Directors - Denton.
24 Entries
Dick, You are missed and loved very much still today! I just got around to writing this because I've been very sick the past couple of months and I wasn't sure what to write. I do miss and love you just like the rest of your family does! You are and were a Very Great Man!
Penny Dameron-Hicks
March 21, 2020
I would like to pay respects and offer condolences to the family. I did not know David very well but often saw him at church and remember he and his wife to be very warm and friendly people who made my wife and I feel welcome. He will be missed greatly. May God's blessings of strength and comfort be with his family and friends.

Rev. Anthony L. Sims
July 10, 2019
What a beautiful tribute to an awesome man.
David Phillips
Friend
July 9, 2019
Dick was such a special man to our family. We are so sorry to hear about his death. Our thoughts and prayers are with all of you!
Joe and Ruth Bryant
Friend
July 7, 2019
Dick was a special man, husband, father, coach, friend, and role model. He was a positive influence and inspiration for so many people, including me. He will be missed, and he will be remembered.....always with a smile. Thank you Coach.
Bobby Greenberg
Friend
July 7, 2019
Kelly,Kim and Gail,
I am saddened to hear about your loss. Dick was one of my all-time favorite people and I have fond memories of spending time with him.
I hope you all are doing well.
Bill Vancuren
Bill Vancuren
Friend
July 7, 2019
Offering our deepest condolences during this difficult time.
Bill DeBerry, Jr. & Andrew DeBerry
July 7, 2019
Gail and family,

Our thoughts and prayers are with you in the loss of Dick. We have so many wonderful memories throughout the years.

The Messersmiths
Mary Lou, Jeff, Dan and David
Mary Lou Messersmith
Friend
July 6, 2019
Loved you, Dick❤
Barbara Bush
Family
July 6, 2019
It was our privilege to know Dick from the time we all lived at SHAPE, Belgium. Once we moved back to Texas we reconnected with him and his lovely wife Gail and shared many happy memories of living and working for DoDDS ( Department of Defence Dependent School) in Europe, mainly Belgium and Germany.

Dick was a wonderful friend and we will certainly miss him.

To Gail and family our deepest condolences .

Larry and Georgia Sutton
Friend
July 5, 2019
Coach was such an inspiration to many young people living in Hot Springs, AR. No matter where he and Gail were living, we kept in touch by telephone and Facebook. We have all lost a wonderful friend, mentor and coach.
Kathy Muse
Friend
July 5, 2019
Dick was a great guy and good friend to many. He will be missed.
Bobby Goslee
Friend
July 5, 2019
Gail, i was greatly saddened to read that Dick had passed. My thoughts and prayers are with you and your family. I have many fond memories of working with Dick, Tom Leblanc, and the DoDDS USA all stars as well as going head to head in our battles on the basketball court during the years at Weisbaden. Dick was an exception teacher, coach, and friend. I am sure you and your family would say his excellence as a spouse, father, and grandfather met or exceeded those of his coaching teaching and mentoring. Stay strong knowing that Dick's legacy will continue in all those he.met on his journey through life.
Charlie Toth
Friend
July 4, 2019
Dick has been such a good friend. He was always smiling and having fun. Wesley and I will miss him so much.
Donna Chubb
Friend
July 4, 2019
I has been an honor having known Dick.
Sarah Ettredge
Friend
July 4, 2019
Gail, Kelly, Kim and family, we are so sad for your loss. God bless and comfort you at this difficult time.
Bob and Joann Estes
Friend
July 4, 2019
Coach Dameron was a guiding force in my life At Hot Springs High. My father was Superintendent if schools and greatly admires Dick. Condolences to the family
Hugh L Mills Jr. Kansas City MO
Hugh Mills
Student
July 4, 2019
Dick always had a smile and a great story about life to tell. He was passionate about sports and life itself. Prayers to Gail and all the family.
Linda Curtis
Friend
July 4, 2019
What I remember most about Coach was his happiness of life, his willingness to share, and his excitement that was there every single day. RIP Coach
Alan Janske
Student
July 4, 2019
We are deeply saddened by the passing of your wonderful father. Dick's Legacy continues through the eyes of his children, grandchildren, and friends left behind. Blessing as you celebrate Coach Dameron's life. Much Love from Team Burns.
Robert L Burns
Student
July 4, 2019
So sorry for your loss...
Larry and Donna Terrill
Acquaintance
July 4, 2019
When Coach Dameron was Athletic Director at Bentonville, AR, I walked out of there knowing I could always knock on his door (because I had more than a few times), with a role model, with his son as a friend, and with so many good memories to carry and treasure. He helped give me dreams to live.
Major General Rick Waddell
Student
July 4, 2019
Bruce Scott
Friend
July 3, 2019
Dick was a wonderful coach and mentor in my playing days at Hot Springs High. It was great seeing him a a couple of HSHS reunions. A truly great man!
Tony Confer
Friend
July 3, 2019
Showing 1 - 24 of 24 results